By all accounts the traffic this evening is horrendous all over due to a trifecta of issues.

In George Town part of the port is closed to set up for the Pirates' Week stage and band performance. Pirates week kicks off this today with a Happy Hour sponsored by Margaritaville, CUC's pan in De City competition and the kick-off party at Royal Palms.

In addition to the road closures, a multiple car vehicular accident by the A.L. Thompson roundabout caused additional traffic delays for persons heading to West Bay. Police and ambulance were on the scene.

The driver was arrested on suspicion of DUI and is currently on police bail.

According to the police, the cyclist was taken to the Cayman Islands Hospital where he is being treated for serious but non-life-threatening injuries.

The police used the opportunity to remind the public about the dangers of driving under the influence, and noted that they would have a  “continue to have a strong presence on the roads going into the long weekend”.

More persons than usual may have been headed in that direction in order to participate in the Camana Bay tenth anniversary celebrations and fireworks scheduled for this evening.

Drivers can expect bumper to bumper traffic well into the evening hours. One Cayman Marl Road reader messaged us to say that it took her over 30 minutes to get from Walkers Road to Smith Road – normally a 5-7 minute drive. 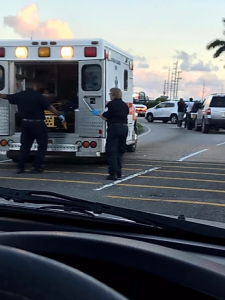 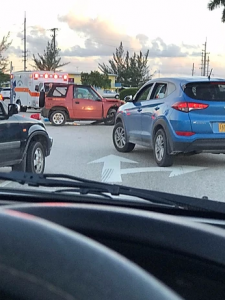