by Renae Stampp
in Investigative Reports
0

(CMR) The police have confirmed that an earlier report by CMR of violence between two physicians at Doctors Hospital was accurate.

CMR received a statement from the hospital denying the incident happened but has since discovered this is a lie.

In their attempt to cover up the incident, they also gaslighted CMR claiming that it was engaging in “harmful gossip” and called the assailant, Dr. Robinson, “a kind and gentle person.”

In a social media post where they shared the statement, it prompted several people to call into question CMR's credibility, with at least one person naming the entity and others stating that CMR should be sued. 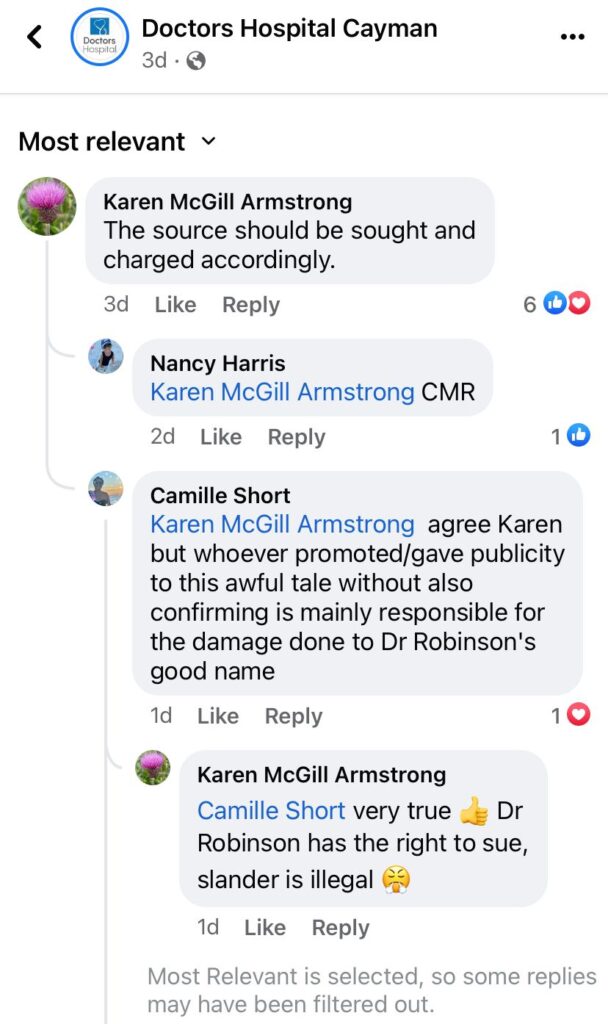 At no point in time did the hospital remove the statements or seek to clarify the defamatory statements.

CMR is now seeking legal advice on how to proceed with the posts.

Their initial claims that violent behavior is not accepted under any circumstances appear to have very little weight in light of these recent revelations.

In an email responding to an inquiry from CMR, the RCIPS confirmed that they responded to a report of a dispute between two persons known to each other at the location at around 3:45 pm on November 18.

They also confirmed that it involved physical contact. The complainant was spoken to and requested that the other person involved be warned.

Multiple sources told CMR that a medical disagreement between Medical Director Dr. Andrew Robinson and Neurologist Dr. Azad Esack resulted in the latter being allegedly assaulted by the much younger Robinson.

However, Chairman of the board, Dr. med Yaron Rado denied the assault happened and said the police were not called by the hospital.

In a statement, the Chairman said, “Following an alleged assault by one member of the Doctors Hospital medical faculty on another, the Senior Leadership Team conducted a full investigation, including interviewing both parties concerned. We acted immediately because behavior of the type alleged is not acceptable under any circumstances within the Doctors Hospital group of companies.”

“Firstly, and unequivocally, there was no assault, or physical aggression of any kind, between the two individuals, and the circulation of news, in this case, was both premature and wholly incorrect, especially in its inference that Dr. Andrew Robinson had assaulted Dr. Azad Esack,” the statement continued.

According to the statement, the two individuals concerned, Dr. Andrew Robinson, Medical Director, and Dr. Azad Esack, Consultant Neurologist, work closely together, discussing many professional matters. It further stated that it was “disappointing for all that energetic debate resulted in a story with such an implication.”

“We would urge individuals to consider the impact of what to them might have seemed like a moment of Friday gossip but to Dr. Robinson, a kind and gentle person and exceptional physician renowned for his compassion and empathy, was obviously extremely hurtful. Dr. Esack was equally “mortified” that Dr. Robinson has been so erroneously judged as a result.”

“The Senior Leadership Team wishes to again reiterate that physical altercation has no place in our workplace. We're obviously relieved that this incident turned out to be nothing of the sort, and we feel deeply sorry for what Dr. Robinson has obviously gone through as a result. We have taken the opportunity to remind all staff though of our strict and high standards and also that all behavior, however benign, has the potential to be misinterpreted and we should all be mindful of that in our day-to-day work,” Dr. Rado's statement concluded.

Tune in to The Cold Hard Truth on Tuesday, December 6, as host Sandy Hill looks further at this issue.

No, thanks.
How do you feel after reading this?
Tags: assaultDr. Andrew RobinsonTMH Doctors Hospital