(CMR) Two physicians at Doctor's Hospital were involved in a physical altercation Friday evening, CMR exclusively learned. According to multiple sources, a medical disagreement between Medical Director Dr. Andrew Robinson and Neurologist Dr. Azad Esack resulted in the latter being allegedly assaulted by the much younger Robinson.

Sources revealed that Dr. Esack did not agree with Dr. Robinson on a medical matter and that resulted in “a fight”.

The police were called to the location, and no further details are available regarding any arrests of the nature of injuries sustained. However, Dr. Robinson is at least 20 years younger than Dr. Esack and considerably fitter and physically stronger. Since the incident, both physicians have had their telephones off and have “gone off the grid”.

What we do know is that the assault happened in front of a small number of people but quickly spread outside the hospital and reached CMR.

Subsequent to our post, Doctor's Hospital quickly issued a statement confirming that the senior leadership team at the facility was aware of “an incident involving two members of staff this evening.”

“It is our belief there are no circumstances in any dispute that justify the use of physical means, and Doctors Hospital has a zero-tolerance policy towards violence under any circumstances. We are obviously responding to this news immediately and at the highest level.”

They confirmed that they would be carrying out an investigation to ascertain all of the facts as an immediate priority. They indicated they are asking for the public's patience as they probe into this incident:

“There is no room for either under- or over-reaction in such circumstances and we appreciate some brief patience whilst we ascertain all of the facts in this case.”

CMR contacted the RCIPS and is still waiting on a response to our media query on the matter. Once that is available, this post will be updated with any further details. 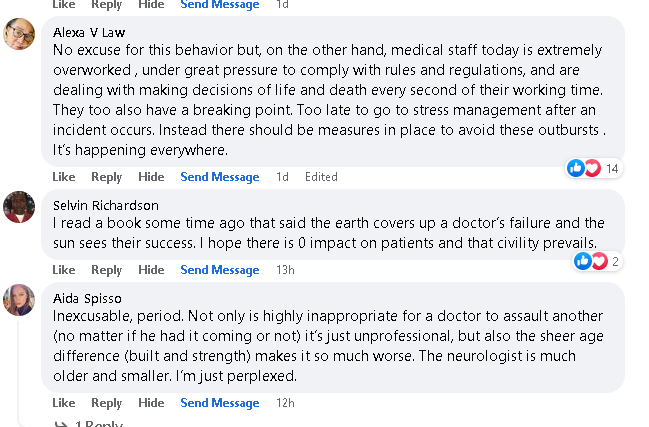 Dr. Robinson is part of the general practice team and is also the medical director and chief of staff. He has been with the hospital for over 13  years and studied at the University of the West Indies (Mona). He has held the position of medical director since March 2020.

Dr. Azad Esack has been a neurologist and neurophysiologist for over three decades. Originally from Trinidad, he attended the University of the West Indies at St. Augustine. He is a more recent recruit after joining the hospital just a year ago. He has previous experience with the HSA.

No, thanks.
How do you feel after reading this?
Tags: Doctor's HospitalDr. Andrew RobinsonDr. Azad Esack

Multiple robberies in George Town in one night