The sanction would ban our athletics from participating in numerous events including the Olympic Games over a disputed amount of some $40,000. The matter came to light when the president of the CIAA, Lancelot Barnes informed his association members in a letter dated Saturday: 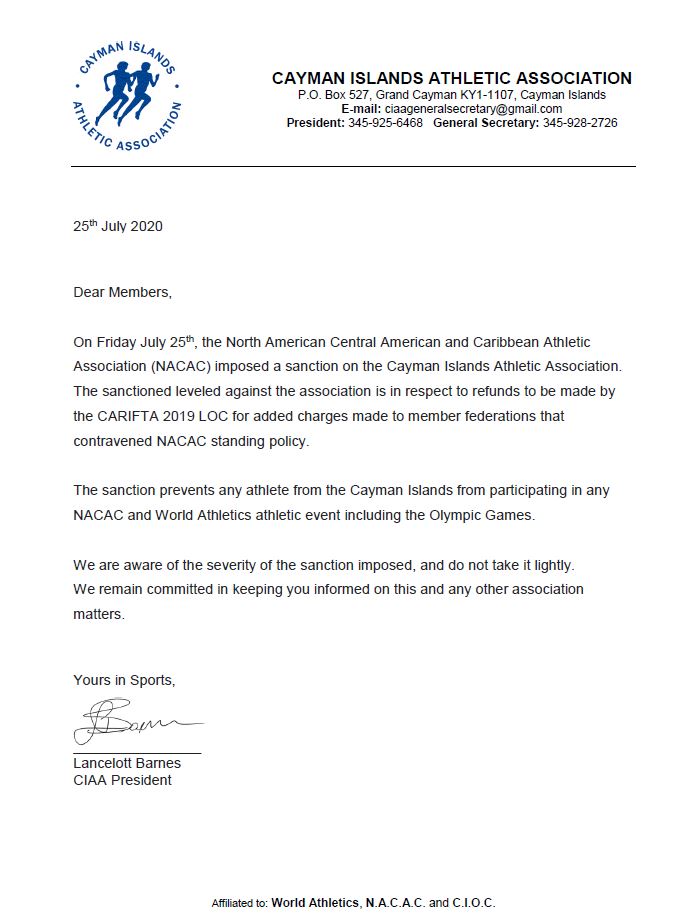 Exclusive CMR sources indicate that the Local Organizing Committee (LOC) which was responsible for the organization of the 3-day athletic event held on April 20–22 2019 was informed of concerns about them overcharging for accommodations fees.

The delegates were covered by the LOC for a five day period but then issues arose after the money was pre-paid.

The allegations were made and discussed during the Congress held at the Westin on April 21, 2019. Minister O'Connor-Connolly was in attendance at the Congress and agreed to ensure the money was refunded. She instructed the LOC to ensure the individual countries were reimbursed. However, despite that directive, it is our understanding that the majority of LOC committee members then decided not to make the payment. Impacted countries had already sent their bank account details etc. for the money to be wired to them.

Participating countries have to pay a levy fee which includes accommodations and food of US$150 per individual athlete and official which is paid to the LOC. The Local Organizing Committee would have already paid a deposit in advance to secure the facilities and food vendors.

The standing policy states that if a country has extra officials those persons should pay the LOC the US$150 plus an additional US$100 per night. Members of the LOC charged them the full US$150 and the going rate at the hotel for that time. CMR understands that the going rate was $300 and upwards per night.

The rules are that where there are additional officials sent by participating countries, the LOC would normally ask for the US$100 contribution and then pay the difference to the facility. The LOC would have been responsible for the difference in the nightly rate.

The Cayman Islands government would pay money upfront to the LOC to cover some of the associated costs of hosting the event. A reminder letter was sent to Minister of Sports Julianna O'Connor-Conolly dated May 13, 2020 reminding her of her promise which had not yet been kept. Following no further action, the sanction letter was sent to CIAA on July 24.

It is understood that the government paid the LOC over KY$800,000 for the event. There were over KY$125,000 collected in levy fees and over KY$70,000 in ticket sales. A portion of that money should go back into CIAA; but that has yet to be done.

Despite the Olympics being posted until next year because of COVID-19 many counties would be using this additional time to prepare and train their athletes.

CARIFTA 2019 saw over 500 athletes and a further 100  officials descend upon the Cayman Islands from all over the Caribbean. Charter flights were organized from Jamaica, Trinidad, the Bahamas, Barbados and Antigua to bring a heavy contingent of athletes and their families to the games.

It was noted at the time that the games injected a substantial amount of money back into the local economy.

Inside sources shared that the non-payment was on a matter of principle and not one of money as the LOC was informed by Cydonie Mothersill that the payment was due as a matter of “tradition” and not policy. LOC has taken the position that the refund is not owed.

Mothersill holds a dual role as both General Secretary for the CIAA and a NACAC Executive Member. She was elected to the latter role in July 2019.

Some persons alleged the CARIFTA games were meant to be a “power-play” for her after her reputation was marred by allegations of professional conflicts and her husband's conviction as a sex predator.

Exclusive sources shared that there is ongoing tension between the LOC and the CIAA that has contributed in part to these issues. They noted that the LOC requested a copy of the policy that the refund decision was made on multiple occasions that placed a cap on what could be charged. However, that has never been provided to LOC. In the circumstances, they are not prepared to make a refund payment. Multiple memorandums of understanding and contractual documents were reviewed and the LOC remains firm in their position that there has been no contravening charges levied.

There were also concerns that NACAC and other similar federations take advantage of the Cayman Islands as a privileged jurisdiction and “cash cow” and charge considerably more money for hosting such events; making it less lucrative for this country. For example, the last hosting country Bahamas was granted US$100,000 from NACAC and that was cut to half for the Cayman Islands who only received US$50,000 from the organization.

Additionally, there were promised money from TV licensing rights that never materialized. This was the first CARIFTA games hosted on the World Athletics YouTube channel.

What is NACAC?
The North American, Central American and Caribbean Athletic Association (NACAC) is the continental confederation governing body of athletics for national governing bodies and multi-national federations within North America, Central America and the Caribbean. NACAC is one of six area associations of the World Athletics (WA) before the International Association of Athletics Federations (IAAF). NACAC was founded on December 10, 1988, in San Juan, Puerto Rico.

Large fight at Bananas results in two taken to hospital