(CMR) Some Jamaican students who previously participated in work-and-study exchange programs in the United States have received payments to their US accounts, which they believe are a part of the federal government’s stimulus package.

One of the students who received over $1,000 USD in his account on April 16, said it is unclear if the money was intended for him, as he last participated in a work-study programme in 2018. 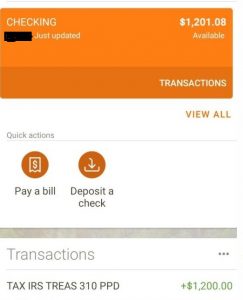 The student at a newer university in Kingston told CMR that initially he was told by a friend that he should check his account, which he did, and found that a deposit was made by the U.S. Internal Revenue Service on April 15.

“I was delighted at first,” said the student who spoke under the condition of anonymity.

However, his delight soon turned to confusion after learning that the money was not intended for J1 student visa holders.

According to the student, he had heard several conflicting reports from friends and others that the monies received by the cohort may have been sent in error, in addition to other rumours circulating that the money was a loan which would be repaid when students return to the US and file their taxes.

When asked if university officials could assist him and others in gaining clarity on the funds, he noted that the universities are not directly involved in the process except for the verification of credentials.

“All the university does is send your transcript, to get into one of these programmes you’ve got to go through an agency,” the student said.

He further added, that after being successfully connected with an employer, and paying the agency fees – that is the last contact a student has with an agency.

The student further told CMR that he was currently trying to make contact with the IRS to find out more details about the payment before using the money.

He further said that while he had not been planning on participating in this year’ work abroad programme, it was unclear the status of programme due to worldwide travel restrictions, as a result of the coronavirus pandemic.

The U.S. Internal Revenue Service on April 15 began to distribute stimulus checks of up to $1,200 to millions of Americans, as the Donald Trump-led administration tries to keep the economy rolling amid the devastation from the coronavirus pandemic.

No, thanks.
How do you feel after reading this?
Tags: J1 student visaJamaica NewsU.S. Internal Revenue Service