(CMR) Double Olympic gold medalist Shelly-Ann Fraser-Pryce has joined those who have been calling for the resumption of sporting activities in Jamaica.

Fraser-Pryce said the majority of stakeholders did not support the view shared by some that the government should not allow sporting activities to resume at this time.

She said, “In the interest  of athletes, along with national and global psyche and the thousands who depend on the industry, we should strongly resist talk of “holding off” on the process allowed for a formal control and safe resumption of Sporting events.”

The four-time world champion gold medalist said she believes that sporting activities can resume safely with the proper protocols in place.

“There is no evidence at all that Sporting events, which have no spectators in a stadium, or where spectators are socially distant, have contributed to or are likely to contribute to a further spike in COVID-19 cases locally,” Fraser-Pryce said in a Facebook post. 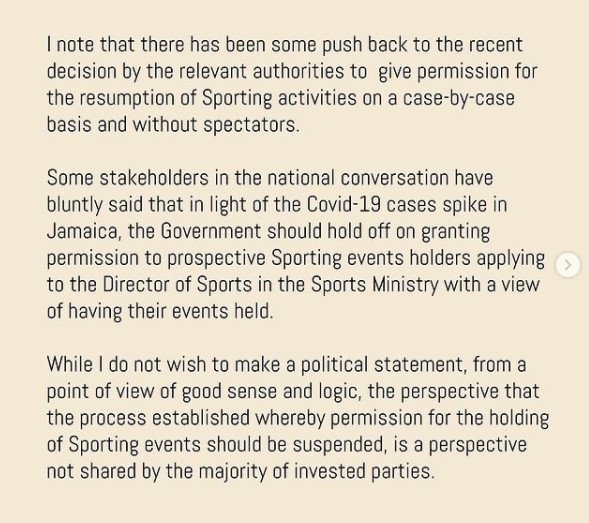 She pointed out that sporting activities were being resumed safely in other countries and urged that Jamaica do likewise.

“I am confident it is not beyond us here in Jamaica to put in place similar  systems to limit the risk of COVID-19 spread while at the same time allowing for reasonable resumption on the sports industry which has contributed so much to Brand Jamaica,” she said

Fraser-Pryce said she was aware of the risk of COVID-19 and would not advocate putting others' lives in danger.

The athlete also highlighted the financial struggles of athletes who have not competed for months.

“I urge the authorities to bear in mind that many participants in the Sports Industry in Jamaica cannot go overseas to compete. The mandatory two-week quarantine requirement upon return is not feasible, and there is no mechanism in place to assist those who are struggling badly due to a lack of finances,” she said.