RUMOR: A social media page reported that the PACT government was meeting to shut down all three islands for two weeks due to the Omicron variant. With 28 minutes of the post, CMR was made aware of it by various social media followers who inquired if there was any truth to it.

FALSE: This rumor is completely false and without any merit. At the time that the post claimed that members were meeting to make such a critical decision both Premier Panton and Deputy Premier Chris Saunders were at the opening ceremony for the Grand Court on Wednesday morning. CMR has confirmed that the government had had no discussions about shutting down the country. In fact, just Tuesday Public Health announced new measures to allow for less restricted movement of vaccinated persons within the community.

Our attempts to correct the post was met by a degree of smugness and stubbornness to make the correction or remove it. 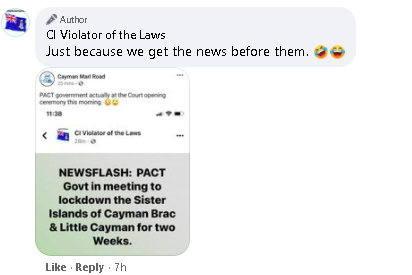 CI Violators of the Laws is ran by a former blogger Kerry Whittaker.