“It has fallen woefully below the standards to be expected of any experienced Attorney at Law practicing in the Cayman Islands.”

(CMR) A recent Grand Court judgment found that an attorney practicing in this jurisdiction was in breach of the Codes of Conduct that regulate the professional activities of Attorneys At Law. In the landmark, first of its kind hearing to be held in the Cayman Islands the court eventually suspended the attorney for six months.

The court found that the attorney had acted unprofessionally and was therefore in breach of the Code.

The court accepted that it is unusual to have a case like this to consider and in March 2017 the Solicitor General on behalf of the Attorney General's Chambers requested a meeting “to discuss the institution of disciplinary proceedings and requested guidance on procedure in this unfamiliar territory.”

In 2017 the lawyer applied to have the proceedings conducted in “private with no reporting of the charge or evidence. The court noted that:

The lawyer concerned is a well-known attorney in a small community. If it were known that he was to be tried for disciplinary matters, then whatever the outcome his practice would likely be damaged and financial hardship follow.” The initial ban on publication has been lifted but the media is still not permitted to identify the attorney.

The basic facts of the case are that the attorney took on several clients in a personal injury matter. Damages were awarded for the injured parties in excess of $1.5 million dollars over 10 years ago. However, the attorney delayed the payment of the judgment. When the initial payment was sent the Plaintiffs queries a missing $59,000 and received no response.

“It is sad to see an attorney of X's undoubted experience fail so badly. He is a well-established practitioner with a practice and staff to maintain, and was charging up to $450 per hour for his services.”

A number of reasons for not sending the funds in a timely manner were used including “volume of work”, computer glitches, and blaming third parties. A year after the judgment the clients sent a letter to the Chief Justice complaining they had not been paid. He requested a response from the attorney within 14 days and none was received.

Numerous complaints were made to the Chief Justice by the clients and an overseas attorney. The Chief Justice wrote to the attorney six times “in an effort to get a response to his concerns” over a four year period.

The request for remaining payouts and complaints went on for years with the Chief Justice demanding a response in 2014 which was also ignored by the attorney. At this stage, the CJ threatened disciplinary action but he still received no response. Finally, by the summer of 2015, the CJ asked why disciplinary proceeds should not be instituted against him to which he replied, “too busy to respond” some 8 days later.

In 2017 a disciplinary hearing notice was served on the attorney. By February 2021 no final account had been produced and no fee note served and in late February the hearing commenced.

The AG's submissions for the purposes of this hearing alleged misconduct under six distinct categories: 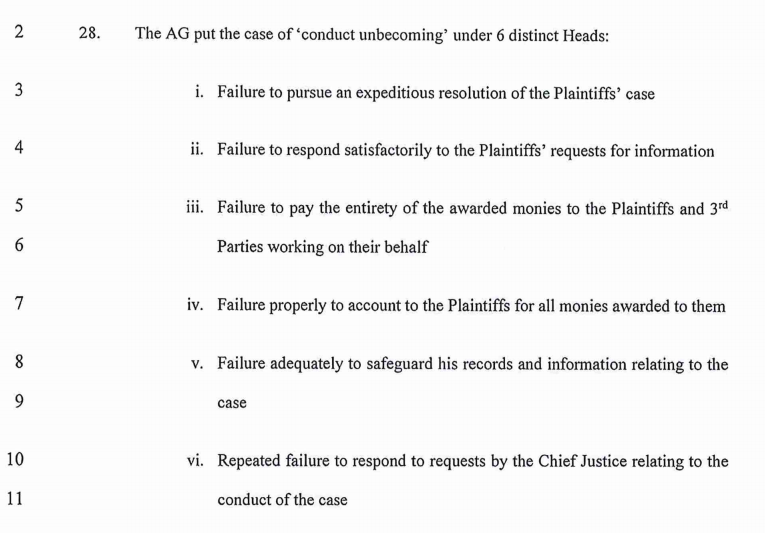 Point 2 was dismissed after the clients decided to withdraw from the complaint but the remaining points were considered by the court. The judge proceeded on the basis of the five other areas. The three-day Zoom hearing took place in late February with the attorney representing himself.

In his response to the allegations, the attorney essential noted that personal injury cases can take years to resolve. He also blamed the injured parties and their overseas attorney. He also said that the defendants in the original action delayed payment of damages. He noted that an error not sending $30,000 to the correct account lead to an understanding and “an unjustified complaint against him.” He also noted that the plaintiffs, the US attorney, a physician and the Chief Justice all “misunderstood his actions”.

“According to X, he was justified in taking 10 years to get to judgment in a damages-only matter, he was paid half his fees, he presented no Fee Note, he drew up no Final Account, his computer records crashed, there was no written termination of his Retainer and where the Chief Justice unjustifiably criticised him”.

In his findings, the judge noted that he did not believe dishonesty was a factor. However, he found that he “downplayed the glaring inconsistencies in his own case” while magnifying those in the AG's case. The judge's finding included:

He concluded that the attorney acted unprofessionally with no justification for his actions and was therefore in breach of the code of conduct for attorneys.

Several days after his written decision finding unprofessional conduct he considered the appropriate penalty and rejected the AG's submission that the attorney should be suspended for 12 months. However, hoping to send a clear message to the profession “that such conduct is unacceptable” he suspended him for 6 months with immediate effect. Costs of over KYD $17,000 was awarded to the Attorney General's Chambers.

CMR understands the matter was to be heard by the Cout of Appeal at the last sitting on May 3 and the decision has been stayed until the decision from that appeal court. In the meantime, he is able to continue practicing.

Search ongoing for over 150 people at collapsed building in Florida