First of all, it's none of your business I would prefer you to stick to questions around the operations of the ministry, and just as I leave you to your private life I would like you to allow me mine. Thank you very much.

(CMR) Jamaica's Minister of Health and Wellness Dr. Chris Tufton responded abruptly to a media query this afternoon about the elephant in the room – his alleged cheating scandal.

Instead of outright denying the allegations that he has been cheating on his wife with Lyndsey McDonnough, the CEO of a Jamaican marketing company, he instead told the reporter that it was none of her business.

Earlier on Thursday, the Opposition People's National Party (PNP) called on Tufton to clarify the allegations made against him in a since-removed Instagram account. Aside from the personal allegations, it was alleged that the relationship gave McDonnough preferential treatment when contracts were awarded.

The Opposition Spokesperson on Health and Wellness, Dr. Morais Guy said, if there is any truth to the allegations, there must be an investigation to ascertain whether Tufton used his position as the portfolio Minister to steer or influence, in part or whole, contracts awarded to the PR company.

Apparently her company was the contract to promote the Jamaica Moves initiative geared at getting Jamaicans to be more active. The program was started by the Minister as a health and wellness program. The possible preferential awarding of a contract was brought up during the meeting by a reporter:

At the same time, Tufton is defending the conditions that physicians in Jamaica are being forced to work under. Many are saying that the ailing health sector is at a critical junction with a dire lack of medication, dangerously long shifts and poor working conditions.

Whilst doctors are claiming this is pushing the system to the brink of collapse Tufton shared on  Television Jamaica’s (TVJ) All Angles program on Wednesday:

“I refuse to accept that there is a lack of medication.”

Both the hosts and a guest were shocked at his response. There was a swift and scathing number of responses across social media. 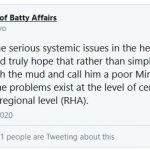 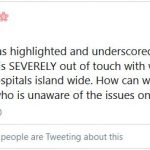 No, thanks.
How do you feel after reading this?
Tags: Dr. Christopher TuftonLyndsey McDonnough