Sea Lice: What you need to know!

(CMR) A sea lice warning has been issued for beaches in the Florida Panhandle.

Authorities are warning visitors at Pensacola Beach about the stinging sea lice.

Sea lice. Beach lice. Seabather's eruption. Pika-pika. Ocean itch. Those are just some of the names given to a rash caused by a minuscule creature that often invades summer waters in Florida and the Caribbean, pestering swimmers with nasty bumps and sometimes flu-like symptoms.

As tiny as a speck of pepper or the period at the end of this sentence, sea lice are not lice at all but the microscopic larvae of marine life such as jellyfish and sea anemones. (Sea lice is also the name of a fish parasite that does not affect humans.)

According to the Florida Department of Public Health, “sea lice” have been infesting coastal waters for more than a century, with most of the outbreaks traced to larvae of the thimble jellyfish, Linuche unguiculata.

Though visible to the naked eye, these baby jellies disappear from sight in the water, making them impossible to avoid. They tend to migrate inside bathing suits, making their way through the mesh of the fabric, where they become trapped and begin to sting.

Unlike with the adult's sting, it doesn't hurt. You won't know you've been stung until the rash appears, usually within 24 hours, sometimes along with fever, chills, headaches and nausea. The rash is often raised, with bumps or blisters that can be very red and extremely itchy. If you've had seabather's eruption before, you are more susceptible to getting it again if you're stung in the future, according to a one study; it also found that children and surfers were also more at risk than the general swimming public.

You can minimize your risk by removing your swimsuit before showering, even if you plan to return to the water. Some believe the larvae can become trapped in the swimsuit fabric, and experts recommend rinsing it in household vinegar or rubbing alcohol before washing and reusing. 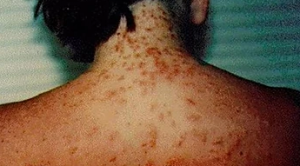 Symptoms are usually mild and often clear by themselves, making diagnosis difficult unless the doctor is aware of sea exposure. But in some cases, they can become severe, with flu-like symptoms that last for weeks.

Kids are especially vulnerable to more severe outbreaks, especially children with allergies or compromised immune systems. Those are often treated with corticosteroids. Milder cases are treated with over-the-counter antihistamines and anti-itch lotions, with mixed results.

Beaches along the Florida coastline are starting to report cases of seabather's eruption this year, but it's too early to tell how widespread the infestation could be. April to July are the most common months for the larvae to appear, and some years are worse than others. An infestation in 1995 spread from the Florida Keys to Jacksonville and beyond.

Arrest made in fraud case of murdered victims