(CMR) All transportation providers in Honduras have gone on strije after talks with the government have proven unsuccessful. Our sources indicate that this has left some Caymanians stranded at the airport in La Ceiba.

The National Transportation Council (CNT) Marvin Galo said they had put forward a proposal to the government.

The strikes started last week Thursday and Friday as a means of protesting the cost of fuel. The initial demand was for an increase in fares to keep par with maintenance andfuel prices, but this was met with public disapproval. Initial negotiations with the government saw them offered a fare increase of one lempira (US$0.04). However, the CNT changed it demands to requesting a 23 lempiras (US$0.95) reduction in the prrice of a gallon of fuel.

â€śA price reduction of 23 lempiras would benefit us all; everyone should understand that,â€ť

said one taxi driver participating in the protest.

Protestors have blocked the street causing schools and other institutions to suspend activities; but by Friday a partial lift was underway. However, they resumed this morning at 8:00 am. Some persons were charging fees to pass the blockagdes but schools were closed as a result of the protests. 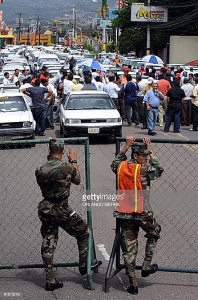 The Honduras National Transportation Association announced it will continue negotiations. Travel advisories have been issued and visitors are advised to avoid all protests as a precaution, never attempt to cross a roadblock without authorization and be prepared for increased traffic congestion on strike days. Individuals are advised against using public transportation and inter-city buses for security reasons.

Several Caymanians have reached out to CMR and are terrified at what is going on and was frightful stating:

â€śPeople are on the streets with machetes stopping people who want to cross walking. So, we are not taking any chances. We may have to go when we can and sleep at the airport. Right now people are being warned not to leave their homes tomorrow because if they see cars on the road they will burn them.â€ť

Photo: Protesters blocked roads and set a government vehicle on fire in the protests.