(CMR) Fresh explosions and a new pyroclastic flow have been reported at Guatemala's Volcan de Fuego.

It comes after at least 38 people were killed and hundreds more injured after the volcano erupted on Sunday, engulfing homes in three villages in the central American country and cutting off several communities from aid. Whole villages remain unaccounted for.

In the Guatemalan village of El Rodeo, heavily armed soldiers wearing blue masks to ward off the dust are standing guard over a community hit by a volcanic eruption that has killed at least 38 people.

Some locals say they did not learn of the danger until it was upon them. El Rodeo resident Rafael Letran said the country's disaster agency sent pickup trucks with workers “yelling at people to leave”. But by that time, he said, “the lava was already here”.

A group of residents arrived at the scene of the lava flow on Monday with shovels and work boots to help the search for survivors and victims.

As Guatemalan authorities dealt with rescue operations Israel said it had delivered food, blankets and medicine through its embassy.

Seismic activity is diminishing in the area around the Volcan de Fuego, Guatemala's National Institute for Seismology, Volcanology, Meteorology and Hydrology has said.

Following the volcano's second eruption of the year, it is now producing between five and seven explosions per hour, varying in intensity from weak, to moderate, to strong. “Abundant” ash clouds reach some 15,000ft into the air, the institute said. Earlier on Monday, Guatemala's government announced three nationwide days of mourning for the “irreparable” loss of life caused by the eruption.

One survivor, Consuelo Hernández, told the Diaro de Centroamerica newspaper that “plenty” of her family members had been left behind.

“Not everyone escaped, I think they were buried,” 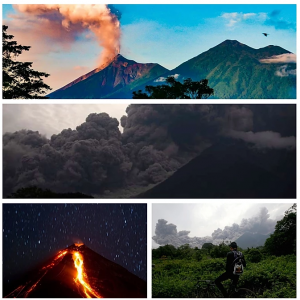 Photos: Pictured above are rescue efforts and images of the damage caused by Guatemala's active volcano, El Fuego.