(CMR) A Jamaican national, David Hylton (51), who worked at Subway as a supervisor for many years was gunned down yesterday in Jamaica.

According to the Jamaican Gleaner he was killed by a passenger in his taxi during his morning run.

A group of students from Ryne Park in St James witnessed the early morning attack and:

“were exposed to real terror yesterday morning when a man who was a passenger in the taxi in which they were travelling alighted from the vehicle, pulled a handgun, and executed the driver as they looked on in horror.”

Hylton was the second person to die by the gun in the parish in a 24-hour window as shortly after 7 p.m. on Thursday, an unemployed resident of York Bush in Mount Carey was shot and killed by unknown assailants.

In the Ryne Park incident, which occurred at about 8 a.m. Hylton was reportedly doing his customary early morning transportation of persons from the community.

He picked up his alleged killer among his passengers. Along the way, the man asked for a stop, alighted from the vehicle, and handed the driver his fare.

While the driver was searching for money to make change for the man, he reportedly pulled a firearm, pointed it at the driver's head and opened fire.

He was later pronounced dead at the local hospital. Hylton had resided in the area for a number of years. The passenger had fled by the time police arrived.

The latest killings bring to 82 the number of persons murdered in St James, which has been under a state of public emergency since the start of the year. 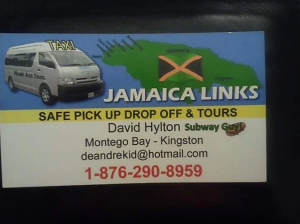 “Oh, I am so heart broken, poor David! What a genuinely nice person he was. I have known him for many years, every morning for years, I would call him at Subways (he was at the one in Industrial Park at that time) and I would run in and pick up my son’s sandwich to take to school. He always had it ready for me.

He had a little car rental thing here too, not licensed but he had purchased a couple of cars and was renting them, always working to better himself, so ambitious and kind, this is horrible and it sounds like a hit, does not sound like he was robbed? Terrible news, poor thing! Jamaica continues to go downhill…“