The Confederation of North, Central America and Caribbean Association Football (CONCACAF) said the event in Managua was being cancelled immediately to ensure the safety of all fans, players, delegations and participants.

“The Confederation has taken the decision to cancel the remainder of the tournament following vigilant monitoring of the situation as it has developed and in close coordination with the Nicaraguan Football Federation and local authorities,” CONCACAF said in a statement announcing the move.

The eight-team event was halfway into the group stages with Mexico and Haiti having clinched berths in the knockout rounds with Nicaragua and Puerto Rico eliminated.

The U.S. team defeated Costa Rica 5-0 Friday and was to play Bermuda on Sunday. That match, which would have been the first ever between the U.S. and Bermuda in women's soccer at any level, was canceled.

“US Soccer officials have notified all the families of our players that our team and staff in Nicaragua are safe and secure,” the US Soccer federation said in a statement.

“We have made arrangements for the return to the United States of our team delegation and have also provided services and accommodations for all the families that traveled to Nicaragua to assist them in returning home as well.

“Safety and security is our only priority as we continue to work with CONCACAF on all matters related to the cancellation of the Women's U-17 Championship.”

Semi-finals were scheduled for Friday with the championship and third-place matches next Sunday. Three teams were set to qualify for the FIFA Under-17 Women's World Cup later this year in Uruguay.

CONCACAF said it will now determine how this will affect the qualifying process for the Women's World Under-17 Cup this summer in Uruguay.

More than 20 people have been killed in clashes between Nicaraguan police and demonstrators during a wave of protests over pension reform, a local human rights group said Sunday. 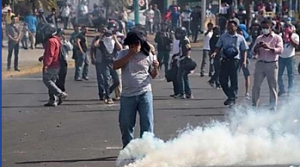 The Nicaraguan Center for Human Rights said it was still trying to verify figures, but that at least 20 people had been killed since protests erupted in the Central American country on Wednesday over plans by President Daniel Ortega to reform the nation's pension system.

The welfare reform package proposed by Nicaraguan President Daniel Ortega that set off days of deadly violence has been canceled, according to Reuters:

“In an address on national television, Ortega said the board of Nicaragua's social security system had voted to revoke the measures that were approved last week. The protests have killed at least seven people and injured hundreds more.”

Violent anti-government protests in Nicaragua continue for a fifth day, and show no signs of slowing down. A local human rights group, the Nicaraguan Human Rights Office (Cenidh), says at least 25 people have been killed. President Daniel Ortega's forces are accused of using live rounds to quell the demonstrations.

The protests were triggered Wednesday by a sweeping pension reform package that increases contributions for workers and employer, but lowers overall benefits.

The protests have been partly driven by students in the capital of Managua, but have rippled to at least 10 cities across the country.

(CMR) A plane carrying 126 people burst into flames after a gear collapsed from its nose during landing  on Tuesday...

(CMR) A police detective whose child died after he went to work forgetting she was in his car is to...

(CMR) Jamaica can now conduct testing for the Monkeypox virus following a regional training in laboratory detection and diagnosis of...

7 members of Haiti’s Special Olympics team missing in US

(CMR) The Osceola County Sheriff's Office in Florida is investigating the disappearance of seven Haitians who were in the US...

(CMR) The UK has decided not to impose direct rule on the British Virgin Islands, despite the former premier's recent arrest...