Click bait story making the rounds – DO NOT OPEN!

(CMR) CLICKBAIT: something (such as a headline) designed to make readers want to click on a hyperlink especially when the link leads to content of dubious value or interest.

There is a post circulating on social media that claims a young lady has been killed in the Cayman Islands after having six figures in her bank account.

The story is fake but claims that: 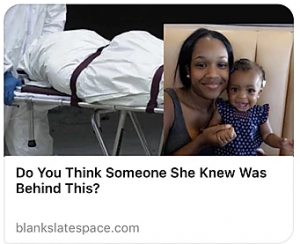 According to family members, Deidra used to be homeless. She was even forced to give up her children to foster care. â€śBut she had finally made it out of the streets, â€ś said Ellen, Deidraâ€™s mother. How did she go from â€śrags to richesâ€ť in such a short time?

Ellen explained that Deidra was surfing Facebook when she came across an online casino giving away 150 Free Chances. She thought nothing of it as it seemed like it was too good to be true.

A few days later, her brother called her and told her about his $5700 jackpot win on a new online slots game called Grand Mondial. Her brother almost guaranteed she would hit. It was then Deidra connected the dots. However, Deidra did not hit anything with her free spins, but since her brother was so sure that she would hit – she took a chance and deposited $20.

What happened next would change her life forever. 15 spins later, she hit the jackpot, winning $1,872,387 in a matter of minutes. Having won over 50 times her annual allowance in a single spin, she was now off the streets.

Early Monday morning, 42-year-old single mom Deidra Bibbs was shot in her home. Just hours before, she bragged that she had over 6 figures in her bank account on Twitter. Her tweet went viral in just one hour. However, her joy was cut short as she was soon killed.

She was baffled when he saw $1,872,387 USD on her cell phone but she knew it was too early to celebrate. It was when the money was successfully transferred to her RBC bank account that she fell to her knees in joy. 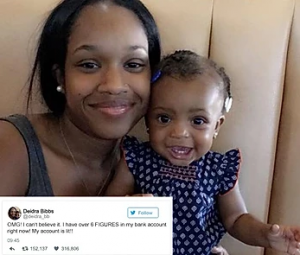 The aim of stories like this to convince people that they too can win money and should click on the various links in the story to do so.

This fake story is loosely based on one that was reported earlier in the year in the NY Post. Read more. This story was covered by legit media sources and her murderer was captured. Read more.