(CMR) The Department of Environment is warning people to be on the lookout for Brazilian Perppertrees, which are toxic to both skin and eyes.

The Brazilian Peppertree (Schinus terebinthifolia), also known as Brazilian pepper, aroeira, rose pepper, Christmas berry or Florida Holly, is a highly invasive, poisonous, South American plant that originally entered Cayman accidentally with a shipment of ornamental plants. It is a member of the poison oak and ivy family and was first detected in Cayman Brac in 2009 and later seen in Grand Cayman in 2020.

Department of Environment Research Officers recently discovered a new plot of Brazilian peppertrees in Newlands, Grand Cayman, and have treated them to kill their root systems and marked them with caution tape to alert members of the public not to get close to this potent and harmful plant.

Brazilian Pepper can grow in most environments but thrives in disturbed areas where water collects, like canals, drainage ditches, ponds, walking paths, and road sides, and is often confused with mangrove and buttonwood. It can be identified by the compound leaf pattern and the distinct flowers and berries that turn from green to red. These berries do attract birds, which aids in wide seed dispersal. 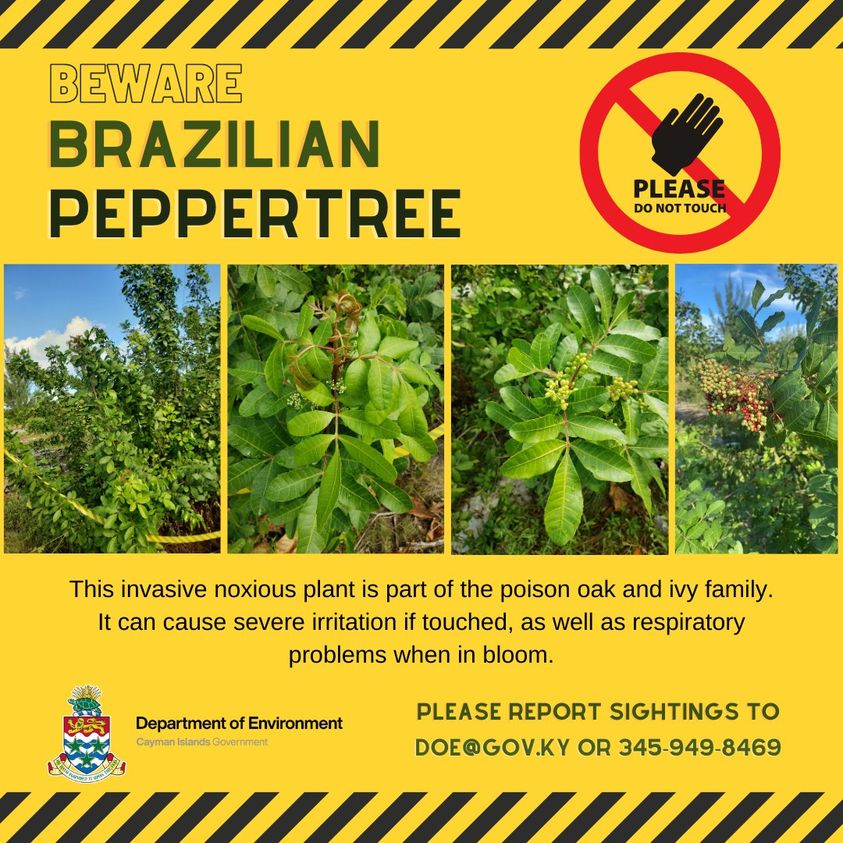 If encountered, people are asked not to attempt to cut down the tree as it is not only toxic to the skin and eyes, but new shoots can grow from old stumps, stimulating propagation. Additionally, burning it releases an irritating and noxious smoke so the only way to ensure it does not spread is for it to be treated by professionals.

The public may notify DoE if they suspect a plant might be a Brazilian Peppertree, by emailing [email protected] with the location and photographs or calling 949-8469.

No, thanks.
How do you feel after reading this?
Tags: Brazilian peppertreeDepartment of Environment

(CMR) New regulations to protect Cayman's native and endemic plants and animals are now in effect under the National Conservation Act....