(CMR) Bob Marley’s grandson, Joseph ‘Mersa’ Marley, has reportedly died at the age of 31. The Jamaican-American reggae artist was found non-responsive in his car in Florida, and early reports are that he died from an asthma attack.

Numerous Jamaican political leaders started posting their condolences late Tuesday afternoon as the news began to spread across the island. Joseph Marley (Jo Mersa) was the eldest and only son of Stephen Marley. Jamaica's Minister of Culture, Gender, Entertainment and Sport, Honorable Olivia Grange, extended condolences to the family by tweeting:

‘I am deeply saddened by the news that artiste Joseph Marley, son of Reggae star, Stephen Marley and grand son of Reggae super star, Bob Marley has died.

She added: ‘His untimely passing at the young age of 31y.o. is a huge loss to the music as we look to the next generation. May he find Eternal Peace as we mourn his loss during this season of goodwill when we celebrate with family and friends our love for each other.’

Jamaica’s leader of the opposition, Mark J Golding, also said: ‘I’ve just learned of the tragic loss of Joseph “Jo Mersa” Marley. A talented young reggae artiste, son of Stephen Marley & grandson of Bob Marley at only 31 yrs old. The loss of a child is a devastating blow no parent should face, my condolences to Stephen & the entire family.’

‘I extend my deepest condolences to Stephen, Jo’s mom, Kerry, the Marleys and other family members. My heartfelt sympathies to Joseph’s friends and associates and to the Reggae music fraternity and fans everywhere.’

Known for his hit “Burn It Down,” the reggae artist leaves behind his wife and daughter. Joseph Mersa Marley spent his early years in Jamaica, where he attended Saints Peter and Paul Preparatory School. He then moved to Florida, where he was a student at Palmetto High School before moving on to Miami Dade College, where he studied studio engineering.

In 2014 he released the EP called Comfortable and in 2021, he came out with Eternal. 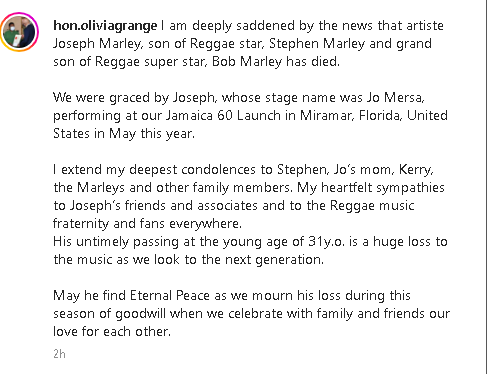 No, thanks.
How do you feel after reading this?
Tags: Bob MarleyStephen Marley