by Renae Stampp
in Weather
0

Although environmental conditions are only marginally favorable, some gradual development of this system is expected over the next several days and a tropical depression is likely to form later this week.

The disturbance is forecast to move slowly toward the west and then west-northwest at 5 to 10 mph, toward the adjacent waters of the northern Leeward Islands. Additional information on this system can be found in high seas forecasts issued by the National Weather Service. It has a medium (50 percent) chance of formation during the next 48 hours and a high (80 percent) chance in the next 5 days. 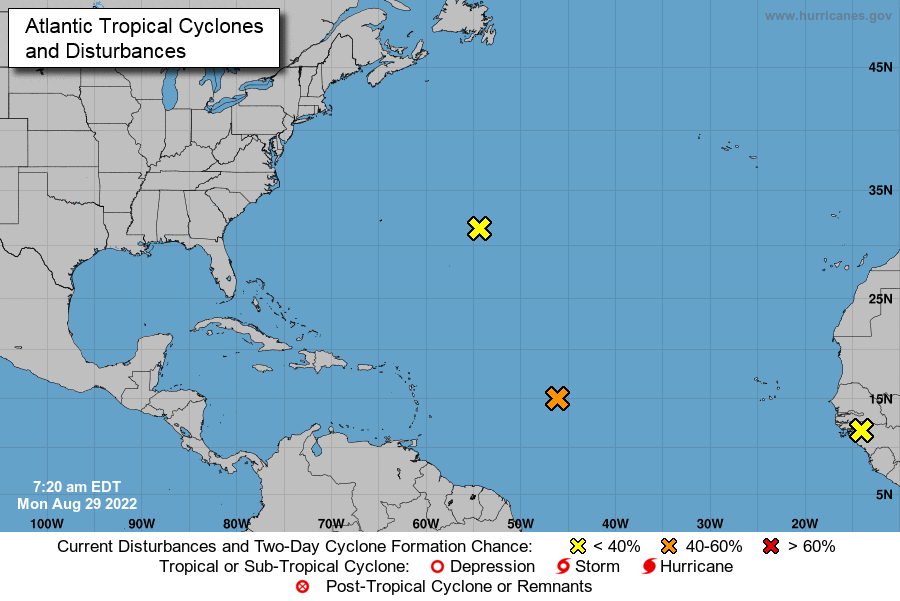 Forecasters are watching a total of three disturbances in the Atlantic, with a trough of low pressure possibly developing in the Caribbean Sea this week. One of the Atlantic disturbances is likely to turn into a tropical depression in the next five days.

In the central Subtropical Atlantic: a small low-pressure system located about 600 miles east of Bermuda continues to produce limited shower activity. Strong upper-level winds and dry air are expected to limit significant development of this system while it drifts southward and southwestward over the central Atlantic during the next couple of days and likely dissipate by the end of the week. It has a low (10 percent) chance of formation during the next 48 hours and in the next 5 days.

One tropical wave in the eastern tropical Atlantic is forecast to move off the west coast of Africa this evening or early Tuesday. According to the National Hurricane Center some gradual development of this system is possible after that time while it generally moves westward to west-northwestward across the far eastern tropical Atlantic. It has a low (10 percent) chance of formation during the next 48 hours and a low ( 30 percent) chance during the next 5 days.

This system could become the next named storm and could affect the northeast Leeward Islands. Long-range models do not show the system entering the Caribbean Sea.

According to the National Hurricane Center, the disturbance has a medium 50% chance of formation in the next 48 hours and a high 80% chance through the next five days.

Tune-in daily for weather updates and more from Kevin Watler.

No, thanks.
How do you feel after reading this?
Tags: thunderstormWeather