Employees become nervous about their future with the newspaper

(CMR) Compass Media is threatening Cayman Marl Road with legal action for what it claims is copyright infringement over a photo of a deceased man named Friday by the police. The stress of media competition has the Compass taking an aggressive stance towards CMR including takedown notices, refuses to participate in activities if CMR is included and complaints about CMR coverage for election and business events.

The move, which many consider petty and desperate comes on the heel of numerous Compass employees expressing their desire to find new employment after the owners allegedly gave publisher, Katheleen Capetta an ultimatum. The industry is abuzz that if Capetta is unable to turn the fledgling company around in six months she will be unemployed and the Compass may shut down entirely.

It is alleged that the company continues to keep its employees under immense pressure to turn the organization into a  more financially viable venture after years of downturns and loss of advertising revenue. This appears to be causing employees such as Editor-in-Chief, Kevin Morales, to continually monitor and scrutinize CMR's content claiming twice in one-week copyright infringement.

The first instance occurred last week after the PACT government's address at the Cayman Islands Chamber of Commerce Parliament Luncheon. CMR had preauthorization to carry the feed from another local video production company that was at the event. It aired live on Facebook but was later removed after the Compass claimed that CMR had infringed on its live stream video via the platform's complaints channels.

This was the first time that a CMR Facebook video claim has not been released by a third party in the four years that the page has been in existence. International companies such as Warner Brothers have made numerous claims over the years but always release them afterward based on fair use industry standards. 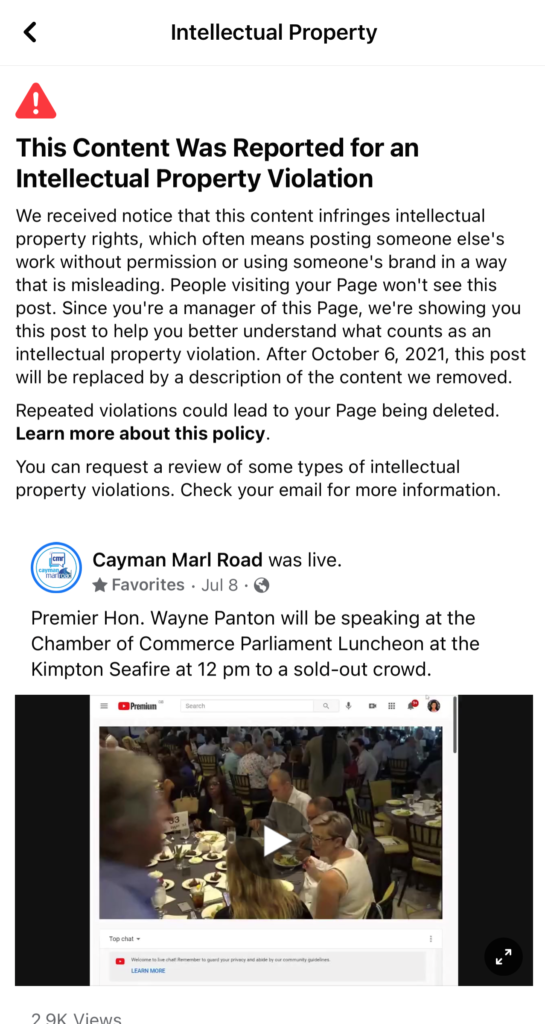 Ironically, at the time of the video's removal hours after it aired, the number of views stood at 2.9k which is even now higher than the number of views that Compass has one week later. CMR was forced to reload the video the following day which gained over 7.1 views; exceeding the 2k view that the Compass obtained.

It turns out that CMR had permission to pull a feed from another media company engaged by the Chamber. However, 20 minutes into the livestream that feed was stopped unbeknownst to CMR causing YouTube to automatically pull the Compass feed.

Despite providing this explanation from both CMR and the original video company Morales refused to release the Facebook video claim forcing CMR to rebroadcast the entire luncheon Saturday evening. Despite the inconvenience, CMR's coverage has netted over 3x the number of views than the Compass video which has been up for a longer period of time.

The second complaint came by way of a letter threatening legal action on Saturday, July 17 over a photo that was used in a recent story. The story related to the unfortunate death of 55-year-old Eldon Charles Walton who succumbed to his injuries after a mass shooting a week before off Martin Drive, Geroge Town.

A CMR regional correspondence used the photo which was in heavy circulation all over social media. There was no knowledge of the Compass owning the photo and in fact, his own friends and family members shared their condolences with the exact same photo being used.

Despite that, the Compass indicates they own the rights to the photo and its use infringes their copyright. The warning letter indicates they are willing to take legal action over it. It does not appear that they have reached out to anyone else about removing their copyrighted photo. CMR has since sourced a better-quality photo of the deceased.

This has not been the first time that the Compass has taken issue with CMR. However, the other instances have been flexing their muscles behind the scenes.

CMR learned shortly after the election the Compass team objected to CMR's coverage of the Chamber debates and even reached out to the Chamber management questioning why CMR was given exclusivity to carry the content. As it turns out, there was no objection to the Compass carrying the content except they intended to charge the NPO to carry the debates on their platforms. With fewer viewers turning in to Compass election live feeds it appears it made no business sense to take them up on their offer.

More recently, the Compass is refusing to participate in a youth-based event that includes CMR indicating to the organizers that they would not participate if CMR is included.

This apparently is not the first time the Compass has taken aim at other local media. Another much smaller publication was threatened with legal action over a title for a government press story. They shared their experiences with CMR stating that they were not willing to take on the Compass who is owned by a local attorney. However, the ridiculousness of the request still lingers:

Many in the industry believe it's this level of engagement that has the Compass changing course and now being more aggressive towards CMR. Speaking on the issue, CMR content manager Sandra Hill commented as such:

“It's quite unfortunate that competitors cannot be somewhat cordial and civil, but if they wish to be sticklers for all infringement rules we certainly hope that they understand the full implications of their request and that it goes both ways. It takes a minute for people to understand that just because you have dominated an industry for 45-years that it will continue forever.”

The Compass takedown notices have the direct impact of reducing CMR's engagement numbers on social media which historically are at least 200% more than than the Compass in any 28-day period.

The Compass continues to struggle with their morning show, Cayman CrossTalk, averaging less than 200 views per day. This is a significant reduction in their numbers over the past 7 months and has not improved despite the introduction of a new host. Most days they have one person watching the live feed at the time it airs.

The Compass employs around 55 persons despite cuts over the past several years. They have undertaken a number of measures to turn the company around including downsizing and implementing a paywall. The latter has caused many to seek other sources for information instead of paying for it.

CMR understands that the Publisher has been given a 6-month deadline to turn the company around. The alternative appears to be a shutdown of the media house. Numerous employees have been reaching out to other companies seeking other employment opportunities fearing for what their future now holds.

TCHT: Compass hating on other media?