Premier expresses disappointment at being blacklisted

by CMR
in Breaking News, Finance
0

Cayman blacklisted for most of 2020

(CMR) In a brief statement this morning the Premier, The Honourable Alden McLaughlin, has expressed his disappointment that the European Union has decided to blacklist the Cayman Islands.

Last week Wednesday he issued a statement that Cayman had in fact not yet been blacklisted despite media outlets reporting on it. Instead, he confirmed that there had been a recommendation made and there appeared to be some hope that it would not be done. However, CMR understands it was just a matter of formality and someone merely needed to sign off to make it official.

Despite that, he took to his social media page to castigate only CMR stating that we had gotten the story wrong. Ironically, the only detail that was incorrect at the time of the initial publication was the fact that he was off-island.

According to his social media posting, he took issue with our headline among other things: 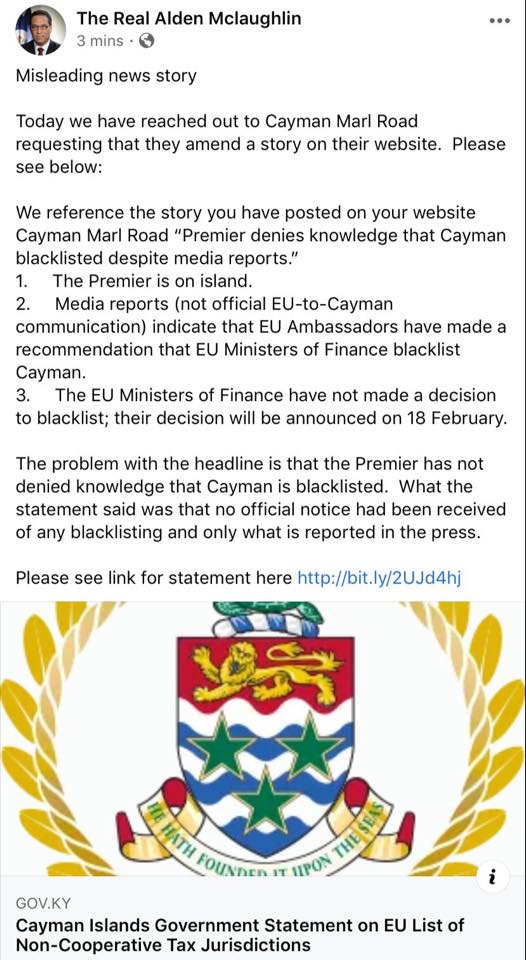 CMR focused on the inaccuracies of this original post during our weekly THE COLD HARD TRUTH.

Today, an official statement has been issued from the Premier's Office confirming we are blacklisted and that:

The Cayman Islands Government has already contacted EU officials to begin the process of being removed from the EU list of non-cooperative jurisdictions as soon as possible, which is understood to be October this year, said the Cayman Islands Premier, the Hon. Alden McLaughlin. Acknowledging that the EU’s decision today (Tuesday, 18 February) is deeply disappointing, Premier McLaughlin noted that over the past two years, Cayman’s Government has cooperated with the EU to deliver on our commitments to enhance tax good governance.

CMR understands the Cayman Islands is prepared to hire some real heavy hitters in the UK and EU with hopes of lobbying our removal.

The Cayman Islands joins Fiji, Oman, Samoa, Trinidad and Tobago, Vanuatu and the three US territories of American Samoa, Guam, and the US Virgin Islands, on the “non-cooperative” list. According to international reports with the UK no longer being part of the EU it was a natural fallout of that decision as the UK no longer has the necessary power to protect us within the EU.

Last year the UK and its “corporate tax haven network” was judged to be by far the world’s greatest enabler of corporate tax avoidance by the Tax Justice Network. It has essentially found that the tax regimes of these territories facilitated offshore structures that attracted profits without real economic activity.

The EU continues to negotiate the UK's exit details after Brexit amid concerns it will a “Singapore-on-Thames”, undercutting the European model. In fact, the draft mandate to be finalized on February 25, 2020, stipulates the UK must maintain high standards on tax and calls for the UK to commit in a treaty to maintaining standards in term of “exchange of information on income, financial accounts, tax rulings, country-by-country reports, beneficial ownership, and potential cross-border tax-planning arrangements”.

No, thanks.
How do you feel after reading this?
Tags: EU Blacklist