(CMR) According to the Financial Times the Cayman Islands has been added to a nine-country European Union blacklist of foreign tax havens, becoming the first UK overseas territory to be “named and shamed by Brussels for failing to crack down on tax abuse.” Despite media reports, Premier Alden McLaughlin, has shared that they not yet received any official confirmation of the decision.

Government officials have told CMR the FT article is inaccurate in that it has only been recommended that we be placed on the blacklist.

The shocking decision comes after Financial Services Minister Tara Rivers went to Brussels In September 2018 in an attempt to keep the Cayman Islands from being blacklisted by the EU. At the time Rivers shared that:

‘This visit allows important face-to-face dialogue with EU officials about their concerns, and Cayman’s efforts to date to develop proposals and appropriate legislation,”

Consultation was said to be taking place in the financial services industry on what appropriate legislative steps should be taken after the EU claimes that Cayman operates “tax regimes that facilitate offshore structures which attract profits without real economic activity”. 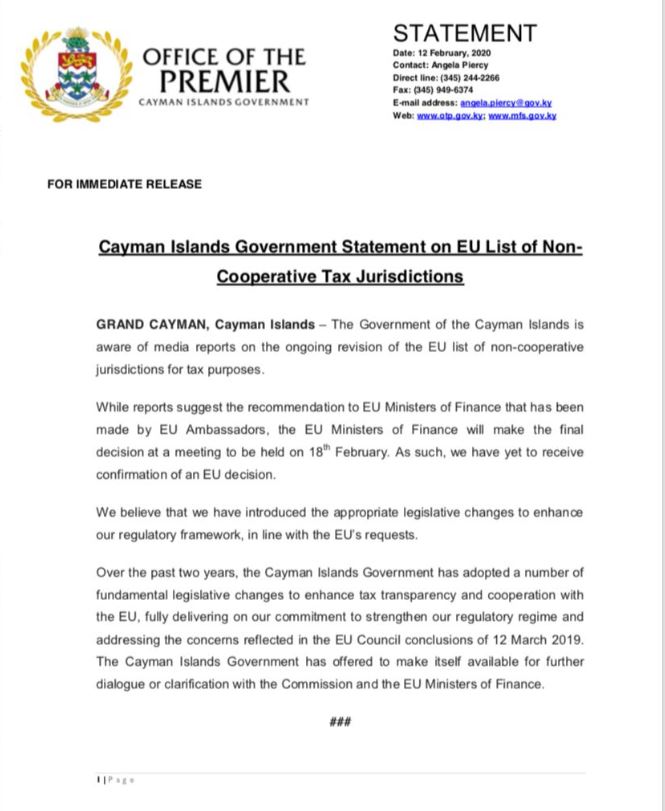 The decision was made earlier today by the EU27; which comprises the 27 European Union countries after the UK left. According to the statement the Cayman Islands; despite signing a plethora of agreements over the years, have still not effectively cooperate with the EU. It is set that the decision will be confirmed next week.

In his letter penned earlier today, he states that despite this possible decision they feel confident the legislation will pass the final examination next week

Apparently the statues of the Cayman Islands and the British Virgin Islands were both up for review by the EU this month after being placed on a grey list; which gave time to introduce legislation to address the concerns about companies who are claiming a tax benefit but do not have “a sufficient economic presence on the island.”

Despite the legislative changes made last year the EU still found them to be “deficient” and no in line with EU standards in particular where it deals with investment funds.

The EU's list was first set up in 2017 to place pressure on “tax haven” countries like Cayman which they claim creates unfair competition. They have justified their actions by claiming that blacklisting adds to greater transparency.  Blacklisted countries can expect to not be able to access EU funding programs and any European companies doing business here would have to take additional compliance measures.

The original list of 15 countries has been shaved down to eight including Oman, Fiji, and Vanuatu. Overseas territories do not receive the same benefits as EU members who are not subjected to tax screening. The UK may no longer receive those since Brexit.

There were rumors circulating in the local business community that CMR became aware of on Monday that the decision was imminent.

No, thanks.
How do you feel after reading this?
Tags: EU Blacklist