(CMR) Corporate lawyer Simon Courtney (51) was deported today after being convicted in July 2016 for running down an elderly couple whilst intoxicated.

Courtney was sentenced to three years after being found guilty on two counts of of unlawfully and maliciously inflicting grievous bodily harm, plus one charge of reckless driving. The jury found him not guilty of dangerous driving, an alternative charge.

Courtney caused serious bodily harm to the visiting couple in an incident on Sunday, Jan. 25, 2015, shortly after 5 p.m., when his car left the road and hit the victims, who were walking on the sidewalk along West Bay Road. The car was a Mustang Shelby GT 500. Accordingly to the case he accelerated right before hitting the couple.

The incident occurred after Courtney battened a champagne brunch at the Ritz-Carlton, Grand Cayman. Believed to have been drunk at the time, based on witness evidence, he fled the scene and remained missing until the early hours of the next morning. He denied being drunk and despite the evidence against him, remained steadfast in his claims of innocence, refusing to accept responsibility for the injuries he caused to the visiting couple. 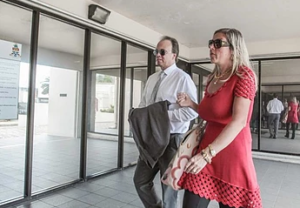 He was later convicted in another DUI, speeding and dangerous driving case that occurred some five years earlier in 2011. In that case the Justice Malcolm Swift lamented that this case had taken so long to reach the courts.

Well placed CMR sources indicate that his wife, who had long stood by him and claimed that she needed him for both financial and emotional support has since filed for divorce. We also understand he may be headed to Australia after his departure from Cayman.

One magistrate described Courtney as “evasive, arrogant and condescending” as he never admitted guilty to any of his matters. No word yet on IF the local authorities have advised the various overseas entities of his convictions.

No, thanks.
How do you feel after reading this?
Tags: Ritz-Carlton