(CMR) As Rubis announced the winner of its annual Pure Luck competition today at least one person is stating an injustice has been carried out.

A local man is upset because he claims the local Rubis gas stations were not adhering to the rules when it comes to the close-off time for the final submission of entry slips for the Rubis Pure Luck competition.

He shared with Cayman Marl Road that, in his opinion, the rules were not being followed by the individual gas stations. His story indicates that at around 9:20 p.m. he went to Rubis Peanuts located in Red Bay to fill up his empty gas tank and to obtain a double stamp for his partially completed card. Apparently Thursdays patrons received double stamps for each $25 of gas purchased. 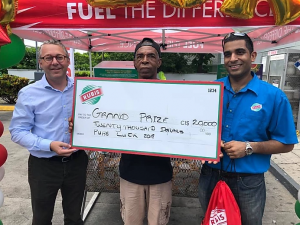 His gas bill was $50.60 plus he purchased a bag of ice. The male attendant inside the station informed him and another customer that the entry box was already taken away so there were no more entries being accepted.

However, he sees this as unfair and shared his feelings on the matter:

“As I know it as per the competition rules it stated that entries would be accepted up to August 30 at 10:00 p.m. so I don't understand how this service station went rogue and adopted a new rule all by themselves.”

Ironically, the patron stated that the other customers weren't inquiring about the competition at all but was trying to charge the gas to his account. He observed:

“I guess the attendant was too nervous to pay attention to what was being asked of him and just like someone who knows he was doing something wrong he was stuck in a tunnel vision mode and fixed to just give a scripted answer to anyone who asked anything remotely about signing.”

He went on to wonder if winners are already pre-selected so that it doesn't really matter who drops in the last minute entry. He concluded by sharing with CMR,

“I just feel wronged about this whole situation and feel that it should be highlighted to the Rubis local head office so that they know what wrong is being committed in their name. Maybe it's time that we start to regular the running of raffles as well”