(CMR) Late last month a CMR contributor was tagged in a post about a man name Vinny George alleging that he was a deportee. At the time, we were uncertain about the veracity of the information. However, he has now been arrested as an illegal immigrant in the Cayman Islands and faces charges that will eventually see him deported.

The poster made a number of claims and shared it on various Facebook pages. We have now received confirmation that The Department of Immigration’s (DOI) Enforcement Division and the Joint Law Enforcement Task Force successful tracked down him down thanks to the tips.

Last Wednesday officers located and arrested the native Saint Vincent man, who had been living in Grand Cayman on various work permits, after being deported from the UK. He was located in the Lower Valley area, and arrested by Immigration officers for making false representations and being a prohibited immigrant.

Deputy Chief Immigration Officer, Gary Wong, stated that the department received a number of complaints via social media in regards to the man’s identity.

“After learning of the situation, thanks to the public’s assistance, we sought confirmation from U.K. authorities, and it was discovered that the man was in fact deported from the U.K. after serving time on an 11-year prison sentence for drug importation offences,” 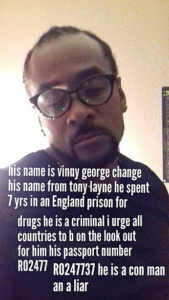 Investigations are still ongoing and he remains in immigration custody at this time.

George will eventually be deported at the conclusion of his case.

“I would like to sincerely thank the members of the public who came forward and provided us with the information, which ultimately led to the success of this operation. We appreciate your support in ensuring border security and public safety,”

Immigration officers continue to encourage the community to be diligent in their awareness of illegal activity, and to always report breaches of the law.

No, thanks.
How do you feel after reading this?
Tags: Department of Immigration

Big drug bust confirmed by RCIPS after showing up on CMR