He explained that after years of contemplating the move they have finally introduced them at Republix, West Bay and Countryside in Savannah. Republix has had the carts for a few months now and they were rolled out at Countryside last week.

He explained the dual functionality of the devices included stopping theft as people would walk out the door without paying for their groceries:

“This new system helps to alleviate this.” 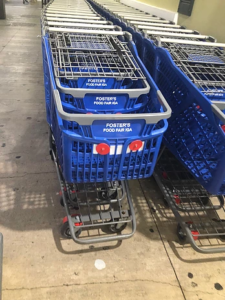 He also explained that the store was having to replace hundreds of carts each year because they would vanish entirely. This was a much more difficult decision and the company had held off for years before implementing it. However, not only is there the cost of the replacement carts but the additional costs of diverting staff and paying excess payroll to have them go around the community to collect the carts.

However, he remains sensitive to the needs to the community that may need the carts to reach the bus stop and as such has delayed the roll out for the main airport location until a solution can be sorted out with the National Road Authority. Essentially this would give persons access to the bus stop and no further. He noted:

“We have been very sensitive to our customers who do not have vehicles and this was precisely why we have not implemented this solution sooner”.

However, the business case and savings now obviously warrant the implementation.

The vast majority of persons who commented on social media appeared to be in favor of the move. Many commented that the abandoned carts often created a road hazard as well as became a nuisance for residence of surrounding neighborhoods. 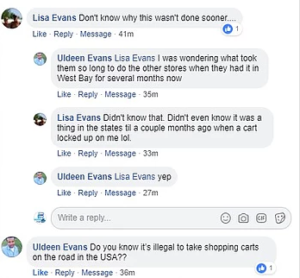