(CMR) A drunk couple was observed pulling off the road earlier this afternoon off Paddington Place, Godfrey Nixon Way and then lying on the ground until police were summoned to assist them. 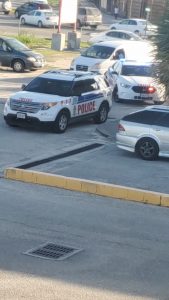 Exclusive CMR sources indicate that the couple was heavily intoxicated and were seen regurgitating all over the roadside “for a long time”. One source indicated they spent the afternoon at the distillery at Tortuga Rum. Apparently they are tourists residing on Seven Mile Beach.

Police were contacted by concern citizens who then overheard them telling the two police cruisers that they had been driving. Eyewitnesses said that the female was the most severe and was purple in her face. However, the police offered some assistance with water and she appeared to be breathing better.

The eyewitness stayed for an hour and noted that no ambulance was dispatched to assist during that time. She did not notice how they left the scene. There is no information as yet on if the parties have been arrested.

No, thanks.
How do you feel after reading this?
Tags: drunk driver