CMO: Hold off on big parties this weekend

(CMR) As the number of COVID-19 cases in the Cayman Islands continues to surge, Chief Medical Officer Dr. John Lee has urged residents to be safe over the upcoming holiday weekend.

Dr Lee said, “If you're going to mix with people, please do so outdoors if you can. Hold off having big parties and big gatherings, especially in indoor spaces. Please do so because that's the wise and sensible thing to do when we have such widespread community transmission.”

“And in particular, be careful of those who are unvaccinated, for example, children, and for those who are elderly or vulnerable. Those people need particular attention with regards scrupulous hygiene and mask-wearing if appropriate.”

Fifteen persons are now hospitalized, and of that number, 12 or 80 percent are unvaccinated, three or 20 percent are in critical care.

Dr. Lee encouraged unvaccinated individuals to consider getting vaccinated as soon as possible.

As of 8 a.m. on Wednesday, 10 November, 1,413 PCR tests had been conducted in the 24 hours since 8 a.m. on Tuesday, 9 November. The Public Health Department reported 325 positive results out of these tests, with five in travelers and 320 from the community.

These results brought the number of active cases of COVID-19 in the Cayman Islands to 2,485 as of 8 a.m. on Wednesday, 10 November. The total number of cases recorded since the start of the pandemic stood at 3,752 at the same time. The Public Health Department also confirmed that up to 8 a.m. on Wednesday, 10 November, there had been 886 total positive lateral flow tests since the introduction of the lateral flow test program in the Cayman Islands.

As of 8 a.m. on Wednesday 10 November, Faith Hospital confirmed there were 80 active cases in the Sister Islands, with none identified in the previous 24 hours.

Up to that point, 4,806 people were in isolation either in Government isolation facilities or at home.

The Chief Medical Officer said, “That's a large number of new community cases, but I wanted to try and shift where we're focusing our concerns because, as some would have been discussing, this really is more in terms of how our health care services are being used.”

He explained, “Many people with COVID will have very mild symptoms, maybe a fever, maybe a cough and will be able to take simple paracetamol, and after a few days after like just like with many viral illnesses we'll feel quite well again.”

Dr. Lee revealed that a preparation and readiness exercise held on Monday, 8 November between the three local hospitals and relevant emergency and government services showed the Islands to be in a good position to cope with a further surge in cases.

Dr. Lee discussed the status of the admitted patients, revealing that 12 out of the 15 or 80 percent were unvaccinated and that three or 20 percent were in the Critical Care Unit.

“One is requiring a ventilator and two are requiring what we call non-invasive ventilation, that means they're needing some extra respiratory support more than oxygen…So, there are three people that are needing that extra level of ventilation support and there are 12 others who are on the general wards,” he explained.

The Chief Medical Officer described the fluctuating nature of hospital admissions for COVID-19, noting that as some patients recover and get discharged, others are admitted.

Dr. Lee explained that the national strategy is to “dampen down the infection. So, masks, distancing, hand hygiene, our very high vaccination rates and also the lateral flow test being used and the policy being rolled out all of these things will dampen down the spread of Sars-COV-2. And that's exactly what we want to do to make sure that the hospitals do not have too many patients at once.”

The Chief Medical Officer said, “Clearly, we are reopening and also clearly, we are managing the numbers that we have. We've been in this scenario with positive community cases for some nine weeks now, and you'll be aware that in many countries around the world, these so-called waves of infection, as they travel through the community and a lot of people get infected, often take around two to three months to begin to see them burning out.” 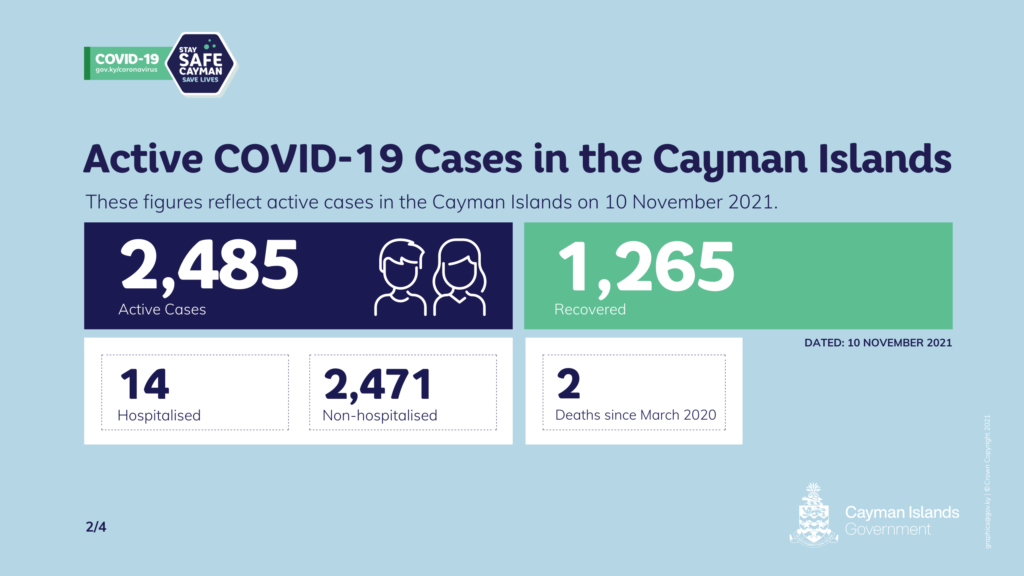 Additionally, 6,787 people (representing 10% of the total population) had received a third or booster dose up to that point.

Since the uptake of the COVID-19 vaccine has been so widely supported by the community, existing vaccine stocks were depleted on Wednesday, 10 November. Additional supplies are anticipated to arrive on Friday, 12 November, on the British Airways flight.

Vaccine clinics will be closed from Thursday, 11 November through Saturday, 13 November and will resume on Tuesday, 16 November.

Please stay tuned to official channels for the revised vaccination schedule to check times and locations.

No, thanks.
How do you feel after reading this?
Tags: Chief Medical Officercovid-19

(CMR) The Cayman Islands recorded 266 new cases of the coronavirus for the week of 20-26 March or Epidemiological Week...