(CMR) Kenia Alonzo Solis (29), accused of bigamy, appeared in Summary Court today before Magistrate Foldats. The matter has now moved to Grand Court and she will attend for another hearing on April 17.

CMR sources indicate that she arrived with a small entourage of about 5 persons and refused the assistance of an interpreter that was on hand; despite previously utilizing one.

Earlier this month she pleaded guilty to assault causing actual bodily harm and was sentenced to seven weeks imprisonment with consideration given for time in custody. Our sources indicate she was released after only two weeks. A more serious charge of wounding was withdrawn by the Crown.

Solis is from Honduras and came to Cayman some years ago, went back to Honduras and then returned to Cayman in 2014. She met the complainant in 2015 and they married in March 2016. Apparently she was already married to another Caymanian from October 2005 – under a fake alias (Wendy Johana Trochez Valladares) and never obtained a divorce.

The circumstances under which she left were not entirely clear but it appears that it was not voluntary. When she returned she came back with her correct documentation.

The Immigration Department has recently revoked the defendant's right to remain on island because of offense relating to false documents.

Our sources indicate that she paid a fine to immigration for the false documents charge. However, they are unable to deport her because of the bigamy matter which has to be dealt with by the courts. We further understand that the police have had this matter since September or October of last year. 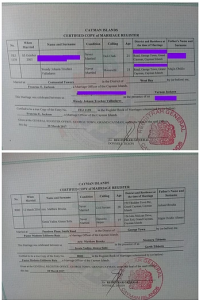 In a related matter her second “husband” was scheduled to appear in court today also because the Court was unaware of his untimely passing over the weekend. That matter has been relisted for June 26 for the Crown to provide a death certificate.

A petition has been started by Facebook poster Cyndi Welcome to have Solis deported in light of many disturbing details that have emerged about her. Some posters indicate that she had gang connections in Honduras and that immigration should look closely other persons here with such connections and possible fake papers.

The petition currently has 321 signatures and can be found here.

VIDEO: The Royals are here!