Design of the Barkers Beach Resort

(CMR)  Coe Group has again gone before the Central Planning Authority (CPA) seeking permission to build a $12 million hotel on Conch Point Drive in West Bay after their 2021 application was rejected.

The application for Barkers Beach Resort is seeking permission to build a hotel, restaurant, pool, cabanas, LPG tanks, and sign. The property presently contains a two-story apartment building. The proposal is for a new five-story building with hotel units and the renovation of the existing two-story building to a bar/restaurant on the ground floor and two hotel units on the second floor.

The developers have reportedly made some adjustments to its previous application with the hope of getting approval.

According to the CPA agenda for its meeting held on Wednesday, 4 January, the previous application for a hotel with ancillary features was refused because the application did not comply with the minimum required setback from the sea or high watermark per Regulation 8(10)(e) of the Development and Planning Regulations.

A review from the Department of Environment, presented in the agenda, said the environment at the application site may not be fitting for a hotel as the site has a natural rock/rubble beach due to the off-shore topography. It is located on an exposed coastline and lacks the protection of a reef offshore.

The DoE has previously expressed concerns about managing expectations of new developmentoff-shoreterates them for this proposal. Much of Grand Cayman’s advertising is based on the Sevoff-shoreBeach experience, but this facility will not provide the same sandy beach entrance and easy wading and swimming. In addition, due to the rocky shoreline, the feasibility of operating watersports from the property, as is often done in hotel establishments, will be difficult, the DoE stated. 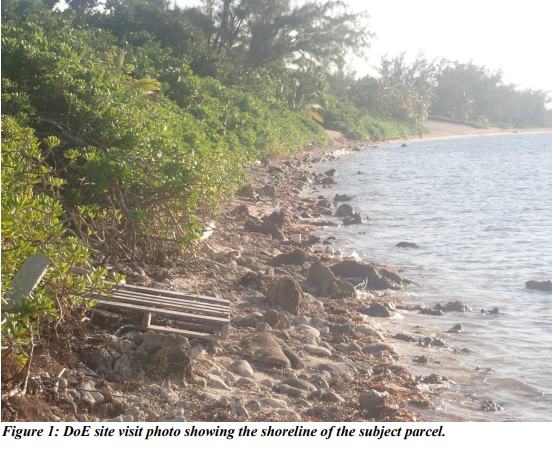 This proposal includes basement-level parking. The DoE noted that to facilitate foundations and basement-level parking, full excavation of the beach ridge must occur. The removal of the beach ridge is a major concern as, in the absence of an offshore fringing reef, it is the first line of defense against wave overtopping for inland properties in the event of a storm, and it contains significant sand reserves.

The DoE recommended that off-shorement parking is removed in order to improve the resiliency of the site and reduce the amount of sand excavation required and that sustainability measures such as building on piles are included in the design.

The land being proposed for development is predominately man-modified and is located adjacent to a Line Fishing Only Zone, a Marine Protected Area (MPA) under the National Conservation Act (NCA), the DoE said.

No, thanks.
How do you feel after reading this?
Tags: Barkers Beach ResortCentral Planning Authority

(CMR) New regulations to protect Cayman's native and endemic plants and animals are now in effect under the National Conservation Act....