(CMR) The Office of the Director of Public Prosecution called witness after witness in the Garfield Robb case, where he faced 12 counts of obtaining property by deception. Despite that many complaints, it appears there are more victims out there who have yet to come forward to the authorities.

In just two days, multiple witnesses accuse Robb of taking thousands of dollars from them and not delivering on various installation jobs through his shutter and screen installation business.

Robb is well known to the CMR community. We have received complaints dating back four years about his predatory style of doing business. His modus operandi during the trial appears to be consistent with the complaints that we received about it. He takes deposits from his clients and then does not deliver on the installation.

Robb appeared very animated from his defendant's seat and was observed making gestures to his alleged victims and flaring up his hands during the court proceedings. He dressed the same each day in his employee shirt with the name of the company screen printed on the back. It appears very possible Robb could still be out there victimizing more persons.

In some instances, witnesses told the court that he used second-hand scrap materials that were “worthless” instead of ordering the new material he claimed for their specific job. 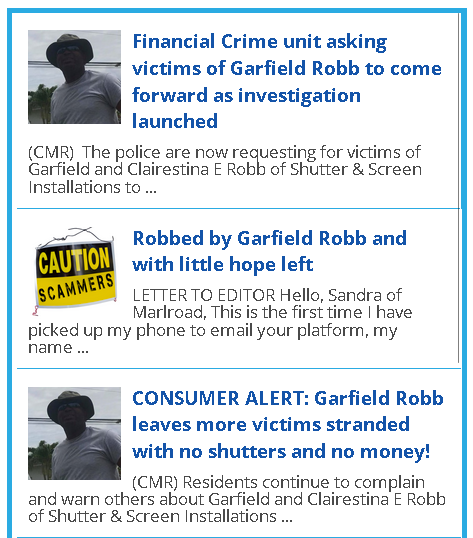 Witnesses testified about constantly chasing Robb to complete the job or return their money – to no avail. One senior citizen explained how Robb was confused about the type of shutters he ordered with him. He would text him about one type of shutter when in fact, he had ordered and was invoiced for something else.

He further explained that at one meeting to receive a partial payment, Robb told him he was a member of the Jamaican lodge – implying some nefarious threat. Ultimately, it became obvious that he had no intention of paying his money back. In a brief comedic moment, he described him as “a bag of breeze” and is full of “lies on pile of lies”. The description caused the judge, media, and even his defense attorneys to chuckle during the proceedings.

Every witness thus far explained how eventually they recognized that Robb was “a thief” or con artist who was quick to collect their money and slow to deliver any meaningful work. In some cases, he returned to their properties to move materials around to another unknowing victim.

One witness is a retired police officer who served on the force for some 31 years. He explained that he delivered “old scrap pieces of material” to his house. Just like the others, he also found him to be “evasive and hard to reach” once he received the initial deposit.

He eventually served him legal documents to commence a civil suit but found that to also be very tedious because of his evading service. He eventually was successful, but Robb still refused to repay the money.

The defense thus far has cross-examined witnesses on the legal options available to them – including why some did not pursue civil proceedings against him instead of seeking assistance from the police. As CMR previously reported, Robb had piled up years of complaints with reluctant police officers telling victims that it was a civil matter and they could not assist.

CMR eventually contacted the police about the volume of complaints and insisted they look into the matter further. It was at that point that an investigation was launched, with victims being asked to step forward. However, this was not the first time that has been in criminal court. However, the last time he managed to get the charges against him dropped after promising to repay his victims.

It appears that Robb has not stopped operating what everyone says is a fraudulent business.

Since the beginning of this trial, more victims have come forward inquiring how they can join the proceedings Any additional victims are encouraged to contact the Financial Crime Investigation Unit directly at [email protected] or 949-8797. 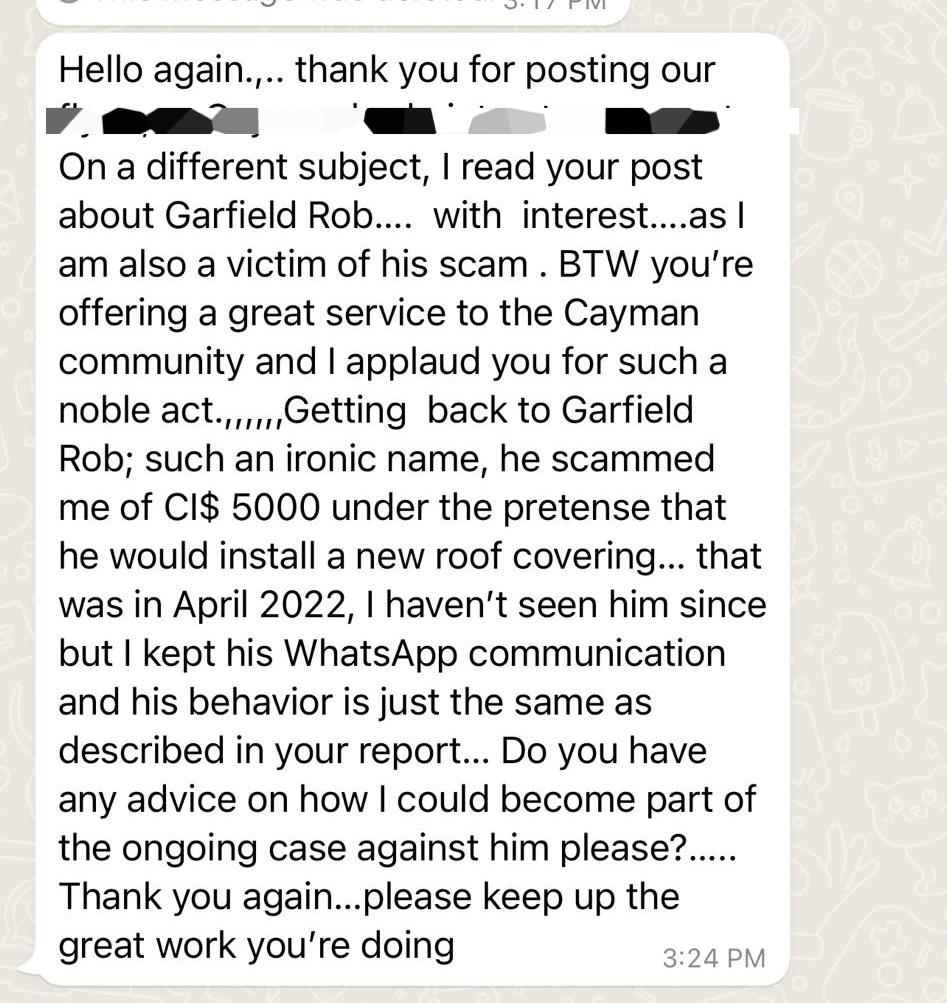 No, thanks.
How do you feel after reading this?
Tags: fraudGarfield Robbtheft

"Harder to stick to a story when it's not true" Crown Counsel Sarah Lewis describes inconsistencies in Harris's story (CMR) The...