The NRA and RCIPS will continue to monitor the operation of the lights and work together to ensure that the situation is managed and that traffic can continue to flow as safely and efficiently as possible.

(CMR) The police announced late Friday evening that the traffic lights at the Bobby Thompson Way and Smith Road intersection are now fixed amid widespread criticism of both them and the National Roads Authority (NRA) for how the outage has been handled.

The NRA shared that the control unit has been managed after the passage of Hurricane Ian when electricity wires had made contact with the device. Since then, the intersection has been a complete traffic nightmare, with many residents calling on the RCIPS to do more as it relates to traffic management and control. However, strapped for resources, they indicated they could only provide assistance during peak hours.

The community wasted no time contacting CMR to call them to task on the matter. Criticism was also made of the NRA during the morning talk show, with people wondering why there were no parts on the island during hurricane season. The suggestion was made that a member of staff could travel to the states to collect the parts and bring them back in order to expedite the repair. 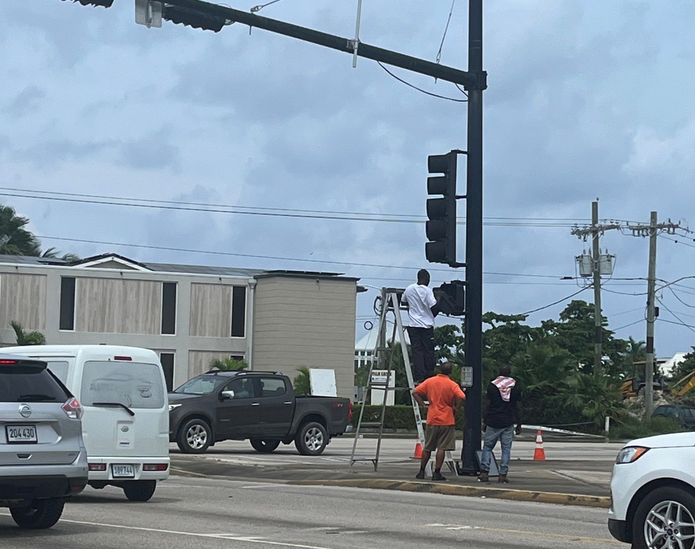 NRA director, Edward Howard, explained to CMR that the replacement parts might take some time as they are sourced out of Orlando, which was also being impacted by Hurricane Ian. He further explained that swapping out parts was not entirely feasible because the entire unit was damaged.

However, the RCIPS has now shared that the NRA was able to repair the unit by substituting previously used parts. They did caution that the fix might only be temporary and may stop working again.

When the lights are non-operative, the busy intersection becomes a four-way stop. It is one of Cayman's most accident-prone locations with thousands of cars using the intersection daily.

No, thanks.
How do you feel after reading this?
Tags: Bobby Thompson WaySmith Roadtraffic lights

(CMR) Three Honduran nationals are in custody in the Cayman Islands after they were caught with cocaine in a commercial...

Armed robberies up by almost 400 percent

(CMR) Thirty-five robberies and attempted robberies have been committed so far this year, a significant increase compared to 2020 and...

UPDATE: Kimora Smith, (14) of Bodden Town, who was reported missing on Monday, 7 November, has been located and returned...