(CMR) A blue iguana from the Queen Elizabeth II Botanic Park that was seen at a business in the industrial park area on Tuesday was rescued by the Department of Environment after Cayman Marl Road posted a photo of the animal.

The National Trust reached out to CMR following the post and steps were taken from there to rescue the iguana.

The DoE said Terrestrial Research Officer Simone Williams and Iguana Researcher and RSPB Biosecurity Officer Tanja Laaser responded to the alert that the animal was seen in the area. They were able to confirm that the large adult male blue iguana wore tags belonging to the small population living within Queen Elizabeth II Botanic Park. 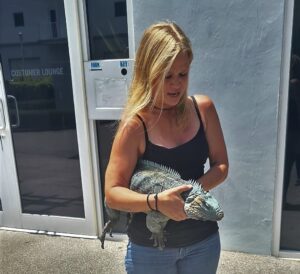 It is believed the Blue Iguana hitched a ride with a Botanic Park vehicle which arrived at the location in the industrial park about an hour before the iguana was discovered. Luckily, the large Blue had a safe ride to town, was swiftly captured, and returned to the park without any injury, the DoE reported.

In this case, the blue iguana was quickly detected and didn’t get too far from his native habitat, but this is an excellent example of how easily stowaways can travel unnoticed, the Department explained.

“Many thanks to the staff from the business who immediately reported the animal to DoE and to all our “fast responders” working to keep our animals and islands safe!” the DoE added.

To report an incident with Cayman's native wildlife, call the DoE on 949-8469.

No, thanks.
How do you feel after reading this?
Tags: blue iguanasDepartment of Environment