(CMR) 18 years ago, Category 5 Hurricane Ivan devastated the Cayman Islands leaving in his wake over US$2.86 billion dollars of damage. The 2004 storm passed within 30 miles of Grand Cayman and quickly became known as the storm of the century, leaving some 95% of the building either completely destroyed or damaged.

Ivan developed from a strong tropical wave that moved off the west coast of Africa on August 31. Initially disorganized by September 1, it was a system to watch as convective bands began to develop around the low-level center.

It would eventually go on to be the strongest hurricane on record that far southeast of the Lesser Antilles, causing considerable damage and loss of life as it passed through the Caribbean Sea. As it approached the Cayman Islands from Jamaica the system restrenghted for the third and final time when it was about 80 n miles west of Grand Cayman. As it passed by, it caused widespread wind damage and storm surge that covered most of the island.

The initial devastation was captured in a letter to the United Kingdom from Hon McKeeva Bush, OBE, JP on October 8, 2004: 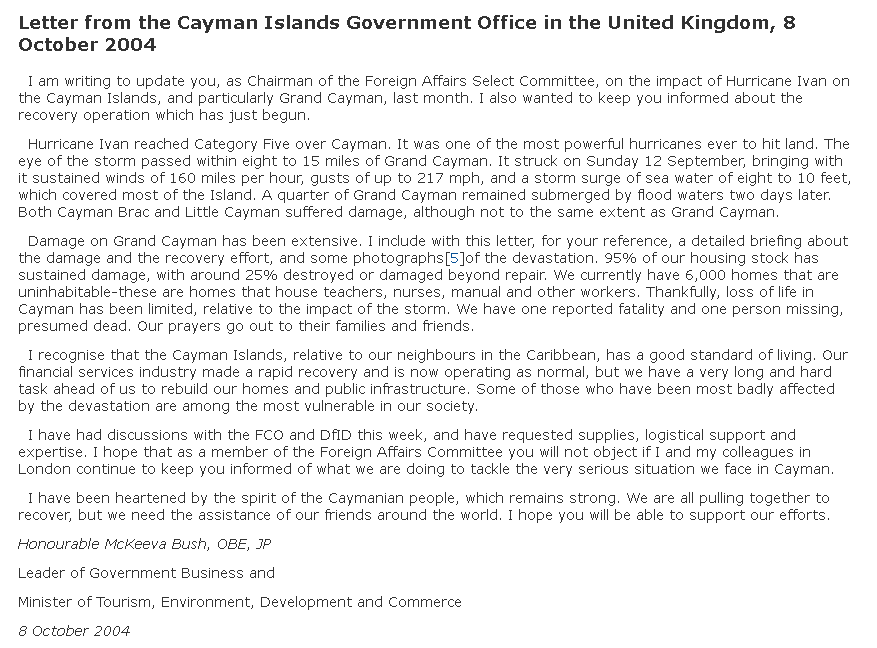 Two people were killed on Grand Cayman, one from drowning and the other from flying debris, as the Category 5 hurricane battered Cayman for 36 hours. Ivan's winds and storm surge were so strong that a quarter or more of the buildings on the islands were reported to be uninhabitable, with 85% damaged to some extent.

Most of Grand Cayman remained without power, water, or sewer services for several months after Hurricane Ivan. After five months, barely half the pre-Ivan hotel rooms were usable.

On 11 September, Ivan began affecting the Sister islands of Cayman Brac and Little Cayman with tropical storm winds, and Grand Cayman began experiencing tropical storm winds later that afternoon. The National Weather Service reported that Ivan's center was 113 miles SE of Grand Cayman by 10 pm. At that time, hurricane-force winds of over 100 miles per hour were already being experienced on the Island.

At 5 am on Sunday, the storm surge from the North Sound was peaking at 10 feet (National Weather Service). The hurricane made its closest approach at 10 am on Sunday when the eye passed 21 miles SW of the Grand Cayman with winds of 150 mph and gusts of 220 mph.

As the storm continued on its track, storm surges and battering waves heavily affected the south coast of Grand Cayman. Ivan was a slow-moving hurricane that increased the exposure of the Island to hurricane-force winds as well as increased the total amount of rain.

The hurricane temporarily displaced significant proportions of the population. The three most affected districts were George Town, Bodden Town, and East End. Some 402 people were treated for lacerations, wounds, removal of foreign bodies, fractures, and burns as a result of the disaster. However, the general health and well-being of the population were good and were well maintained by dedicated health care professionals, first responders, and the kindness of neighbors.

The United Nations ECLAC team estimated the total economic impact on the Cayman Islands to be 3.4 billion (183 % of GDP). Approximately 83% or 13,535 units of the total housing stock in Grand Cayman suffered some degree of damage. Dwellings situated on the sea shore, in low-lying, or swampy areas, suffered the most severe damage. Older and less well-constructed housing was also severely affected.

The Cayman Islands government reported that 4% of homes affected were so severely damaged that they required complete reconstruction. Approximately 70%, or 9, 475, dwellings suffered severe damage from sea surges or damage caused by winds to roofs, windows, and doors. The remaining 26%, or 3,519 houses, suffered minor damage caused by partial roof removal, low levels of water inundation, or flying roofs and floating objects such as containers. The total financial effect on the housing sector was estimated at CI$1.4 billion. The economic impact on the finance (commerce) and tourism sectors was estimated at around CI$ 460 million.

Since Hurricane Ivan, the Cayman Islands have enhanced their hazard management program and strategy, launching Hazard Management Cayman Islands (HMCI) in 2007 and fully operational in January 2008.

No, thanks.
How do you feel after reading this?
Tags: Hurricane Ivan

(CMR) Twenty honourees from Cayman Brac and Little Cayman were recognized Saturday, 4 February, for exemplary contributions to the Cayman...