After agents leave many without container delivery

(CMR) Local shipping companies have put more stringent measures in place after a man in the Caymanian Islands left some 50 people stranded with items sent through his company to Jamaica late last year. CMR understands that they are now requiring pre-payment of the shipment freight as a security deposit.

This move has forced several rogue shipping agents out of business after it was revealed last month the true magnitude of the problem. Several persons contacted CMR to complain about one particular agent who had been giving them the runaround for the past 8 months.

Rowan G. Cardoza trading as Independent Shipping, admitted during a phone call on CMR's THE COLD HARD TRUTH that he had some difficulties with the shipment. However, he sought to place the blame on Seaboard Marine, claiming that they had shipped the container to the wrong location.

Promoted by his reluctance to answer several questions directly, CMR reached out to Seaboard during the same show and soon discovered that Cardoza was being less than truthful about all the details of his shipment.

Since that July 21 program, it has further been discovered Cardoza disappeared for about four months after getting married. It was this disappearance that proved his undoing.

His extended honeymoon period meant that the container of goods was left at the port in Kingston, Jamaica, with significant fees accruing the entire time. When he finally surfaced, he attempted to put the blame on Seaboard Marine, claiming that they sent the container to Kingston instead of Montego Bay per his initial instructions.

Whilst that is technically correct, what he did not reveal is that had he immediately rectified that mistake by notifying Seaboard and paying his freight charges, the container would have been forwarded and received in Montego Bay within 48 hours. Instead, his four-month-long hiatus left him with a hefty bill he could not pay.

Eventually, the authorities in Jamaica auctioned off what they could to cover some of the outstanding bill.

When he spoke to CMR, Cardoza would not admit that was the likely outcome but instead claimed that “his lawyer” was dealing with the matter and seeking to hold Seaboard responsible. More reliable sources have revealed that this appears to be yet another fabrication, and he, in fact, does not have a lawyer.

Cardoza ultimately conceded that he will have to indemnify his customers for their losses. He shared that God would be assisting him with what appears to be an impossible task.

While he waits on his miracle, many of his clients are wondering who can help them. There is no available consumer protection in the Cayman Islands for people who have found themselves in such predicaments. Other customers have reached to CMR, claiming that his poor track record dates back a number of years.

One lady shared that she shipped her items in 2017 and ran into a similar predicament. By the time she finally tracked down her goods, very few items were salvageable. His MO is after he runs into an issue with the shipment, he refuses customer calls and goes underground: 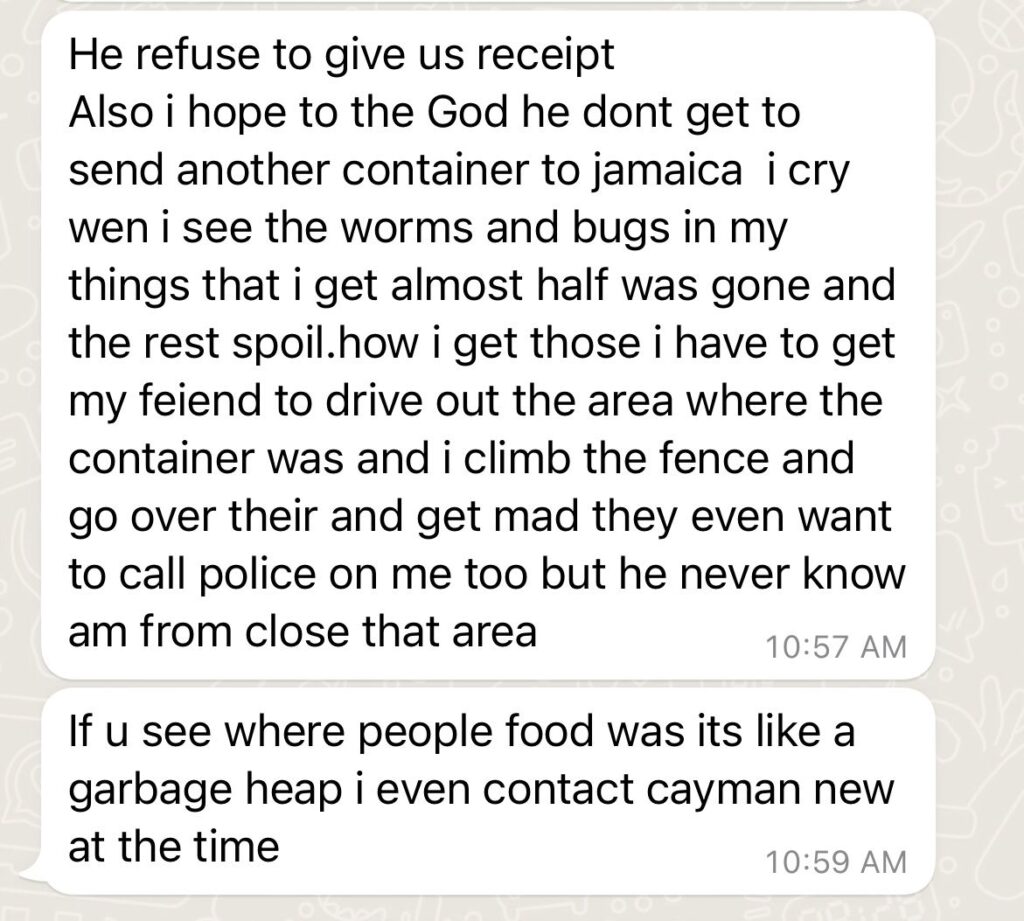 These situations have left many wondering what the Department of Commerce and Investment is prepared to do to help consumers and whether the Cayman Islands Government will begin to implement more significant consumer protection measures.

No, thanks.
How do you feel after reading this?
Tags: Rowan G. Cardoza

(CMR) The Data Protection Act is proving important in the Cayman Islands, not only because of the large number of...

(CMR) Utilities regulator, OfReg, is to create a Consumer Council for the Cayman Islands with the purpose of advising the...