“You have brought nothing but shame and international embarrassment to this nation.”

(CMR) The Miss Universe Cayman Islands (MCIU) franchise is apparently seeking legal advice in light of the ongoing scandal surrounding this year's competition and public outcry for them to resign.

The revelation came this morning as many are also calling on the Ministry of Tourism and Transport (MOT) to issue a public statement on the matter. There is no indication as to what exactly the legal advice is in relation to. CMR reached out to MOT several days ago but has not yet received a response to our query about the pageant scandal, which has now gone international.

The committee has also refused to respond to media questions to it by CMR on Sunday morning. They responded some 12 hours after the email only to say that they would be responding shortly.

However, no response has been forthcoming all week. In an interview on a radio station, they did say that they had the full support of the MOT. Despite that very public assertion, the MOT has uncharacteristically not posted a congratulatory message on its social media platform to winner Tiffany Conolly. In fact, there has been no post at all about the pageant event which took place on Saturday evening.

The revelation about seeking legal advice came in response to a citizen message to the committee demanding their resignation amid the controversy. It appears he has been in contact with them on several occasions already and is now claiming that they have placed the pageant winner in an untenable situation by not disqualifying her prior to her crowing.

He called on them to resign and said:

“Resign, every single one of you.” 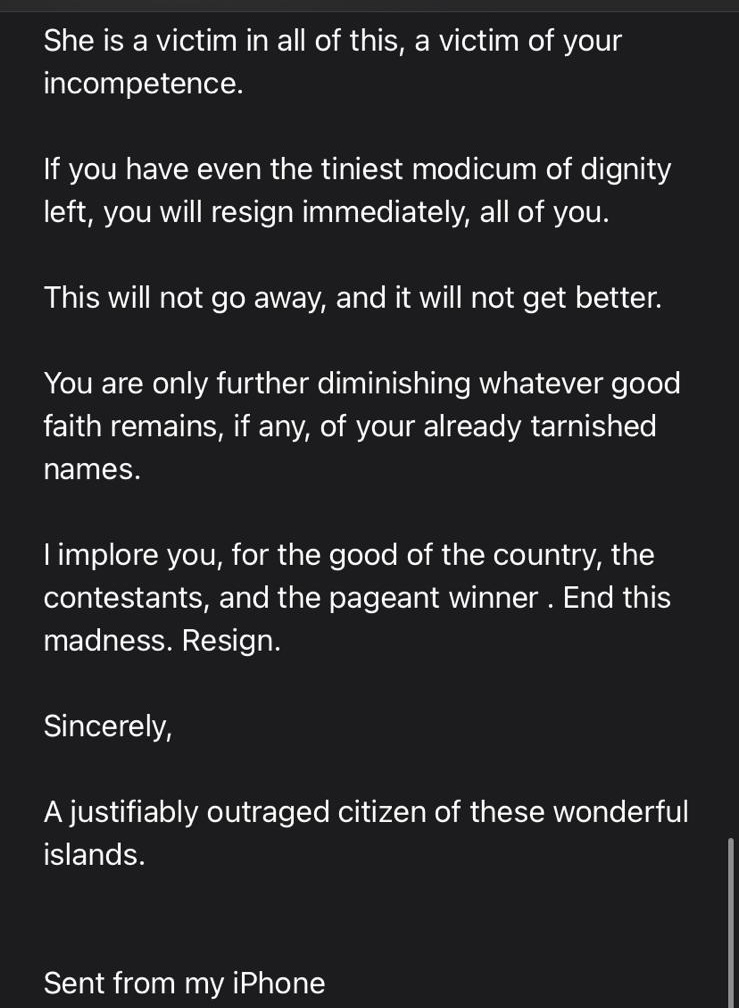 The male writer shared that the young lady is a victim in all of this and they should have been able to foresee what many others did and prevented her from being placed in such a stressful situation. From all accounts, the committee is not taking any responsibility and has instead shared that they did not know about the charges until quite late in the competition.

Whilst giving her credit for telling them they were notified via WhatsApp messenger on July 12 by CMR who had been contacted by the same concerned gentleman who wrote:

They did not respond in any meaningful way except to inquire about who the man was and that they were giving this contestant a “second chance.” It is not known whether Conolly told them before or after this date. However, she did admit to entering the pageant a mere two weeks after “her incident”. She was officially charged in January 2022 but, from all accounts, did not reveal that important court update to the pageant committee either.

Since her crowing on Saturday evening he has reached out to the committee directly and noted his concerns yet again. Today they responded to him to simply say they were “seeking legal advice and will revert shortly.”

Others have also called on the Ministry of Tourism & Transport to disband the committee and take control of the situation, including some former committee members. One shared with CMR that this should have never been allowed to happen and an experienced and knowledgeable committee would have handled the entire situation differently.

The story was picked up from Cayman News Services and carried by the Jamaican Observer, Indian Times and a publication in Honduras as well.

It was also revealed the pageant blogger Luis Alfonso Borrego canceled an interview with the reigning Miss Cayman Islands Universe that was scheduled for Thursday morning, at 11:00 am. In his Instagram stories he shared that she needed to handle “personal matters before interviews.” The MCIU Committee announced the interview on their Facebook page but did not make any mention of the cancellation.

Borrego is a Colombian Telemundo personality TV host and former strategic communicator. He has a particular interest in beauty pageants. 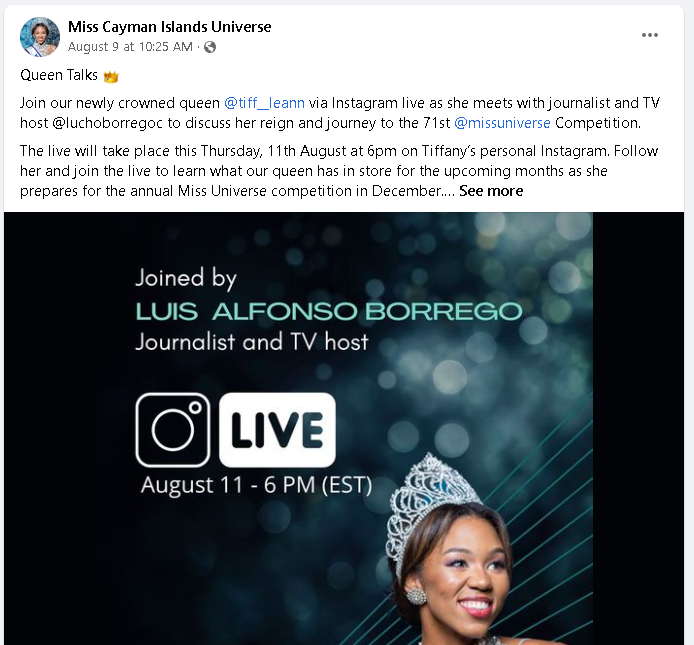 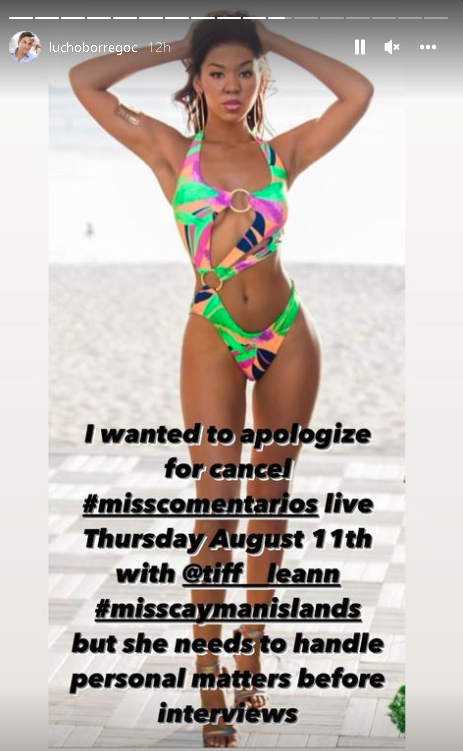 No, thanks.
How do you feel after reading this?
Tags: Miss Cayman Islands UniverseTiffany Conolly