by CMR
in Cayman's Youth
0

The wooden house was engulfed in flames

“Not because Trevor is my son, but he is an incredibly brilliant young man who is focused and has a deep love for God, family, friends, and his community. He is passionate about his education and devoted to the Cadet Corps. I am most pleased with him.”

(CMR) 14-year-old  honor roll Clifton Hunter High School student Trevor Carmola, Jr. (TJ) has become a local hero after rescuing his elderly Bodden Town neighbor from a house fire on Thursday afternoon. The selfless heroic act has been recognized by many after CMR featured him in an interview on Friday evening.

During our exclusive interview, TJ shared how he was coming home from school when he saw some flames in the bushes to the rear of his house off Doubloon Drive. He dropped his backpack and immediately leaped into action running over cliff rocks to assist an elderly man who was inside his home. Initially, he beckoned the man who is said to be in his late 60's to come out of the house. When that was not successful, he was able to pull elder Mr. Ray Terry out of his wooden house as the fire quickly spread to that structure off Branch Road.

He then sat with him outside as he contacted 911. He shared that the man was distraught about the fire and he was worried about his wellbeing. CMR understands he's fine and with family.

This is TJ's interview with CMR:

Despite being hospitalized for smoke inhalation for 24 hours after the incident; TJ noted that he was happy to help and didn't even think about his own safety at the time.

He credits his rescue operations training from the Cayman Islands Cadet Corps as being instrumental in his ability to keep calm under the circumstances and knowing exactly what to do. The Cadet Corps posted on their social media page that they too were very proud of him noting:

“A heroic act of bravery was displayed by our own Sgt. Carmola Trevor as he rescued an elderly civilian from a fire in this community.”

What is even more amazing is that TJ has always had a big heart and his short life story has already had a number of interesting twists and unexpected turns.

At the tender age of nine, he was baptized after he survived a life-changing bout of meningitis. His mom shared that he expressed at the time that he came out of the illness stating that the Lord had healed and saved him and that he had many things to do. After spending two weeks in the hospital he went and sat with Pastor James Arch and expressed his desire to be baptized.

Since then, TJ has kept good on his commitment to give back to his community and remain committed to excellence in his personal achievements.

The following year at age 10 he wanted to contribute to making the lives of other sick children better. He was moved to grow his hair 22 inches so that he could donate it at the 4th annual Hannah's Heroes Big Shave which raises funds for the St. Baldrick's Foundation, the largest private fundraiser of pediatric cancer research. His hair was donated to a UK charity The Little Princess Trust which makes wigs for children undergoing cancer treatments. 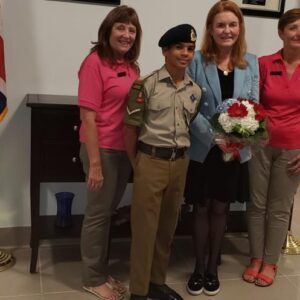 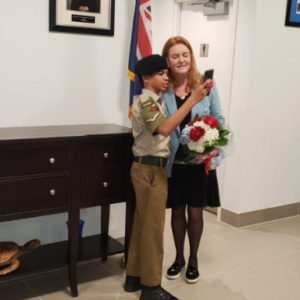 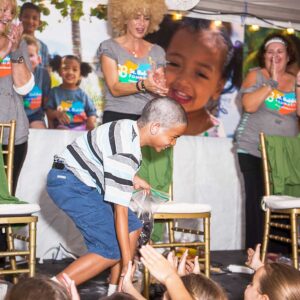 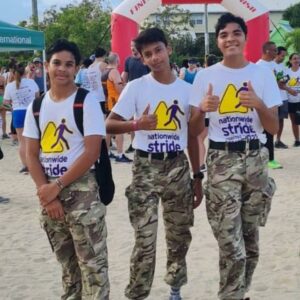 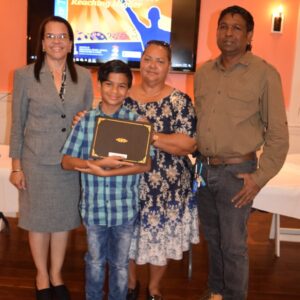 That alone would have been enough to make TJ's life story stand out but he has already achieved a lot of other amazing feats. He was the youngest Proud of Them award recipient at age 11.

As Cadet of the Year in October 2019, he welcomed Sarah Ferguson, Duchess of York when she visited the Cayman Islands at the Breast Cancer Foundation Gala. He made a lasting impression on the Duchess as she shared with many how awed she was by him.

During his cadet tenure, he has received numerous other awards including Commandant's Award Most Outstanding Overall Recruit 2018 and the Most Outstanding Clifton Hunter High School Recruit.

Trevor keeps busy with his schedule of community involvement including singing in the youth choir at church and playing the flute in the Cadet Corps Band. He attends youth group on Fridays and volleyball on Saturday nights. He recently placed fourth in the Conyers Novice Debate 2020.

Trevor's parents are Trevor Carmola, Sr.  and Deidre Seymour Carmola and he is the grandchild of C.A. Sammy and Gay Jackson.

No, thanks.
How do you feel after reading this?
Tags: Deidre Seymour CarmolaJr.Trevor Carmola

(CMR) Cayman youth parliamentarian Chad Powell Jr drew attention to the high cost of living and housing crisis in the...

(CMR) The Ministry of Youth, Sports, Culture & Heritage is inviting males, ages 18 to 25 years old, to apply to...

"May this appointment encourage every little brown girl out there who thinks she may not be enough. Go and take...

(CMR) Caymanian Dejea Lyons has been honored with The Diana Award for going above and beyond in her daily life...

Are you too young to get a stroke?