(CMR) Roydell Carter former director of the Department of Environmental Health is running for elected office in the district of Newlands exclusive sources have shared.

The information first came to CMR's attention on Monday morning and when asked to comment on the well-placed rumor Carter indicated he would be “will release something very soon as to my plans”. Well, this morning there was documentation in circulation that proved the rumor to be 100 percent correct.

It declares that he is a candidate for Newlands and his slogan is “A Better Choice for Change”. He is hosting a drive this weekend for the unemployed and voters in the district. 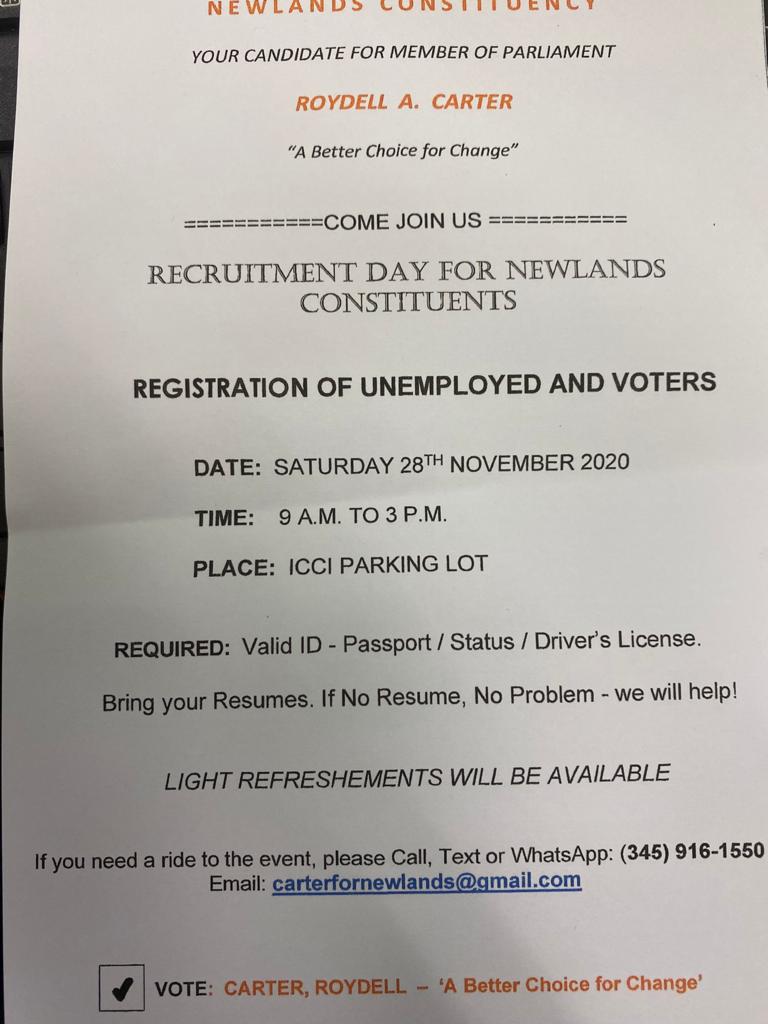 This would mean that the political field in Newslands is likely to be as crowded as Prospect with at least four candidates vying for the one seat in each constituency so far. Carter originally hails from the district of East End.

A 30-year career civil servant, he was paid off in 2019 after a rumor that he was on leave since November 2017. At the time government would make no official comments about his absence except to deny the rumors that he had been placed on official required leave. However, they had several acting directors in his absence.

At the time the department was plagued with a number of issues including delayed pick-ups, queries about excessive overtime for the workers and employee complaints. In fact, a government audit revealed that for the fiscal year 2016-2017 the department overspent by some CI$2.24 million dollars in overtime – almost 800% over budget.

In the report, auditor Andy Bonner concluded that fraud of public cash had been committed due to numerous failures at both the department and ministerial levels. In fact, the report laid some blame squarely on Carter stating:

“Ultimately, the director of DEH had the responsibility of managing the approved budget, avoiding cost overruns and escalating concerns to the ministry, all of which he substantially failed to do,”

The government eventually confirmed that he “opted to retire from the civil service” but gave no specifics details at the time. He worked for the Department of Environmental Health since returning from university in 1988.

A subsequent FOI request was denied and the decision upheld by the Office of the Ombudsmen that sought to establish how much he received during his retirement payout.

Carter has a bachelor's degree in environmental health from Illinois State University and a master's in occupational health and safety from Brunel University London. Since retirement Carter is said to have been working on his Ph.D. from the University of Phoenix in Public Administration. He is also a member of Rotary Cayman.