Interim members of the CIPP

(CMR) A new political party is gearing up for the next general election in May 2021. After months of strategic planning and organizing the Cayman Islands People’s Party announced Thursday, November 12 the establishment of its party headquarters at One Cayman House, North Church Street.

The opening of the new HQ was marked by a brief ribbon-cutting ceremony on Thursday followed by a press conference at which the website for the party was unveiled.

Interim party leader, Ezzard Miller of North Side, also announced an island-wide series of public meetings to familiarise the public with the goals of the party. These meetings were scheduled to begin on Monday, November 16th, at the George Town Town Hall.  A schedule of meetings arranged so far will be circulated shortly.

In-person meetings of party members, ongoing since September 2018 but continuing via the Zoom online platform since the start of the pandemic, will resume at the party HQ, also, on Thursday evening. 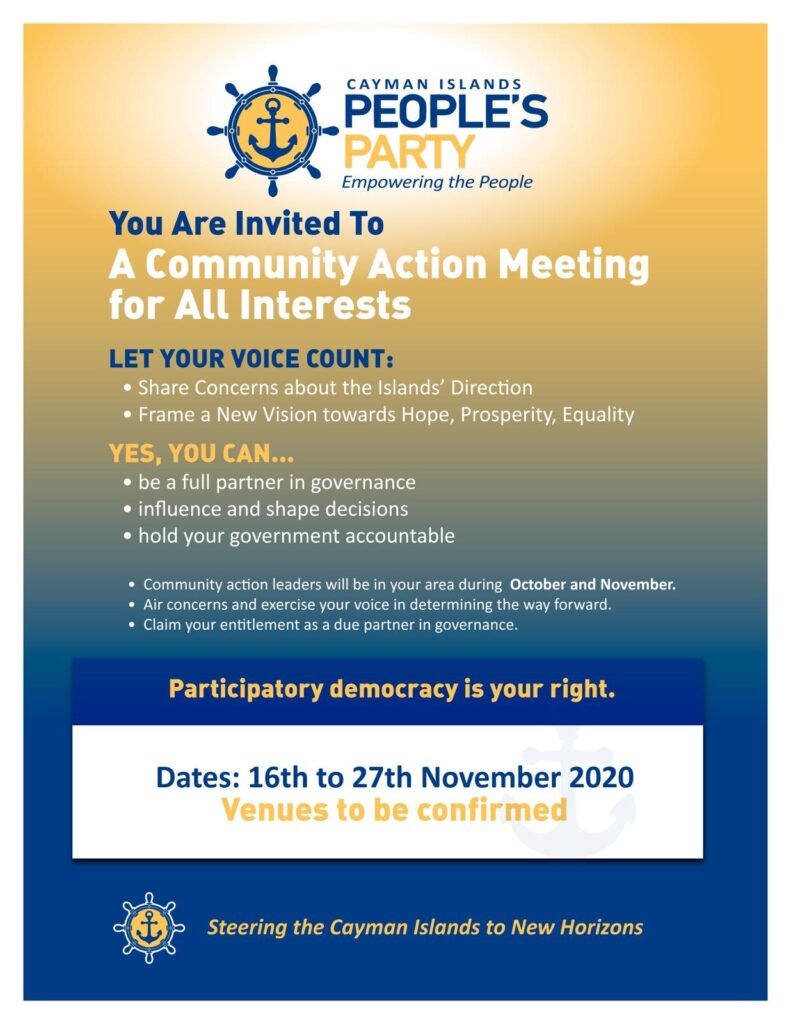 Commenting before the opening, Interim Party Chair Ebanks said: “It should be obvious to most if not all that the public needs to become more involved and assertive in governance.

“We should not assume that someone else is looking out for our interests and those of our children,” he continued, adding: “It is time for far more of us to take our responsibilities seriously. CIPP will provide a much-needed tool for all Caymanians to do just that.”

These tools, Interim Party Leader Miller said, were enshrined in the CIPP Constitution, built around a more participatory style of party politics focused on ensuring government’s accountability to the people.

From Mr. Miller’s perspective, the failure to establish a regime of accountability to the people as a matter of common practice has played a key role in the growing disparity in wealth, health, and life chances for the average person living in the Cayman Islands.

This regime of accountability, Mr. Miller said, can only be achieved by means of a system that is facilitated by, and well-grounded in, routine two-way flow of information.

This basic dynamic, the Interim Leader said, was the heart of the CIPP Constitution, in which “every member—at all levels—becomes constitutionally an integral partner in governance.”

For example, he said, the party rests on a foundation of small neighbourhood groups that will share information across communities and upwards to Electoral District Committees (EDCs).  The EDCs will in turn be represented in a national steering committee that will ensure that the people’s needs are understood and actioned.  In the same way, the information will travel down to and across communities and neighbourhoods.

In this way, he explained, the people will be empowered to participate in a meaningful way to ensure a truly democratic, free and just society.

“We are particularly concerned, also, about the achievement of sustainable development that provides a balance among economic growth, care for the environment, and social wellbeing,” Mr. Miller added.  “Otherwise, we will continue to place at great risk future generations of Caymanians.”

The People’s Party is also a registered non-profit, ensuring greater accountability for, and scrutiny of, the Party’s finances, Interim Party Leader Miller said.

Persons interested in membership in the People’s Party may email or call 327-5757.

(CMR) Premier Hon. Wayne Panton confirmed that he issued "a strongly worded letter" to McKeeva Bush before his London trip on...