(CMR) A large nesting female turtle was rescued Saturday afternoon from a pool on the northern end of Seven Mile Beach after some observers noticed her swimming in the pool around 2:00 pm. She was rescued by a number of Department of Environment (DOE) employees and turtle rescue workers.

The two friends who saw her from a balcony up above said they were surprised from their angle they able to clearly see her but she was quite large and swimming at the time. They shared:

We are happy to have discovered her in the pool.

The rescuers were able to extract her from the pool after giving her a thorough check-up. She sustained minor injuries to her shell likely obtained when she fell into the pool. She was then guided back into the ocean where she safely swam off. They also marked the area where she laid her eggs and will be closely monitoring their progress. It takes anywhere from 50-60 days for green turtle eggs to hatch and return to the ocean. 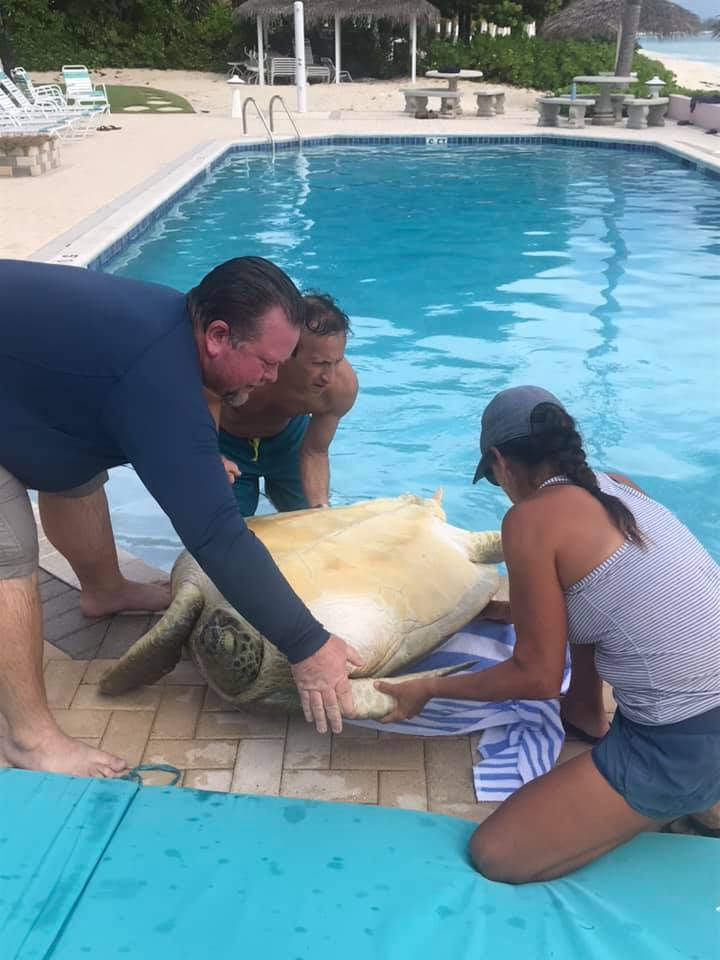 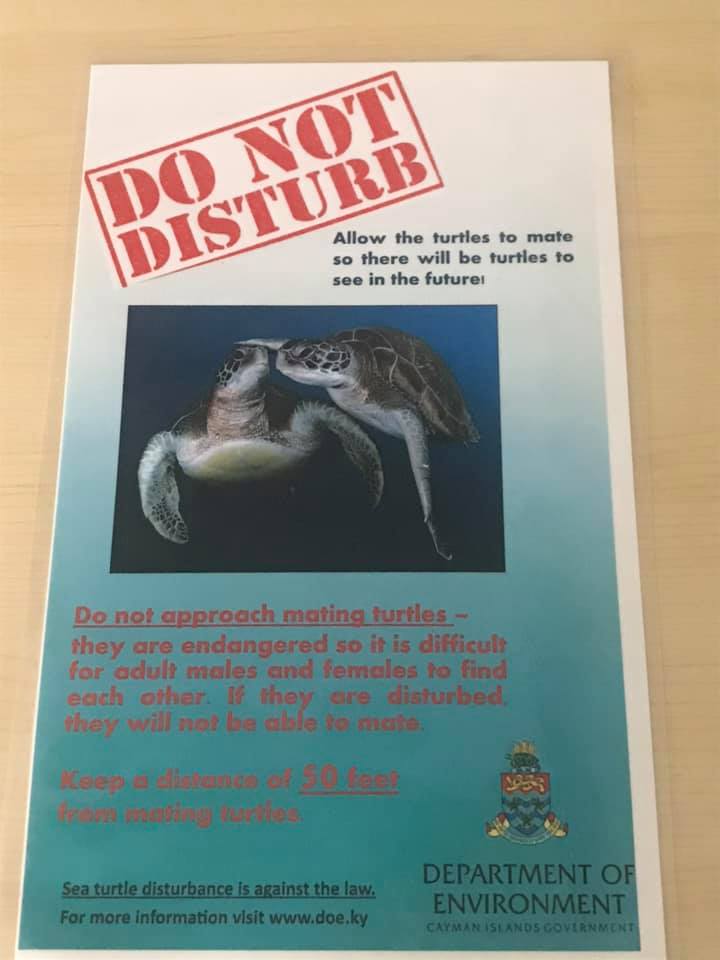 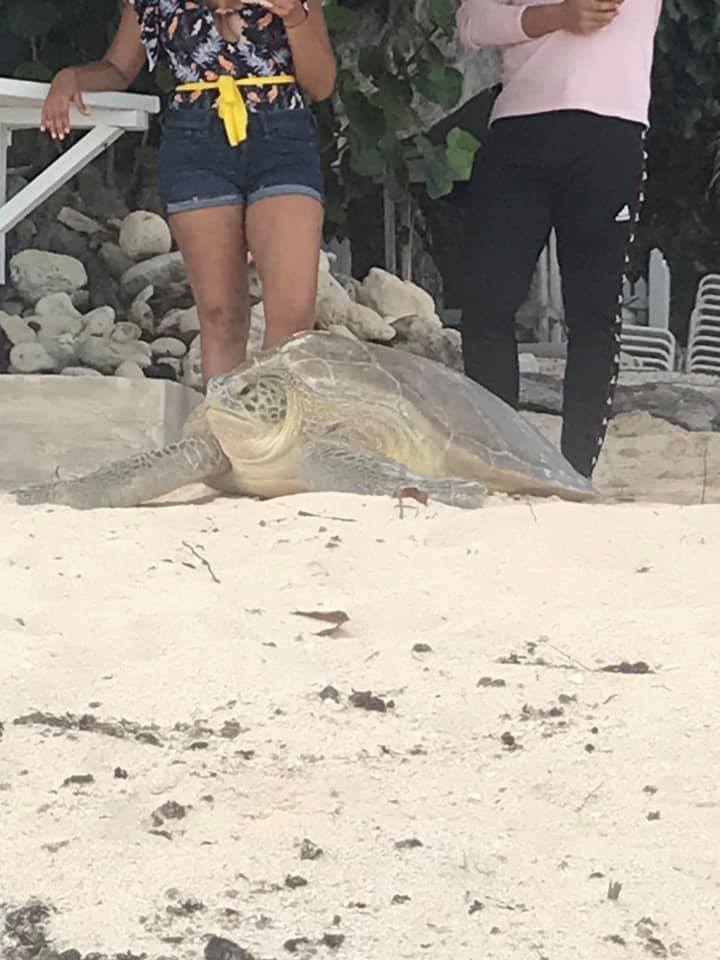 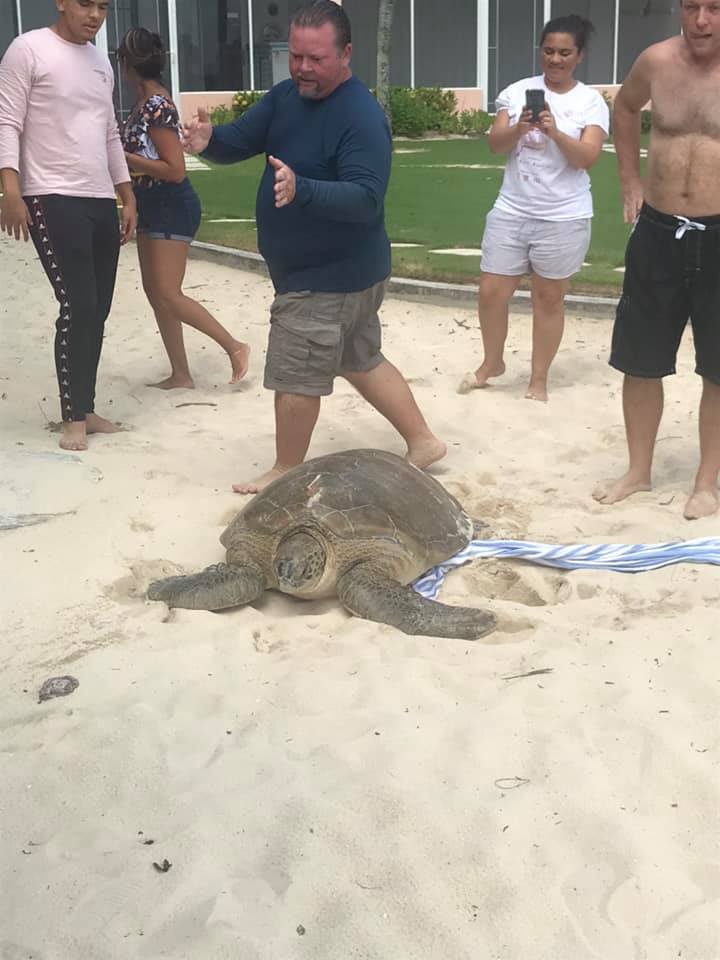 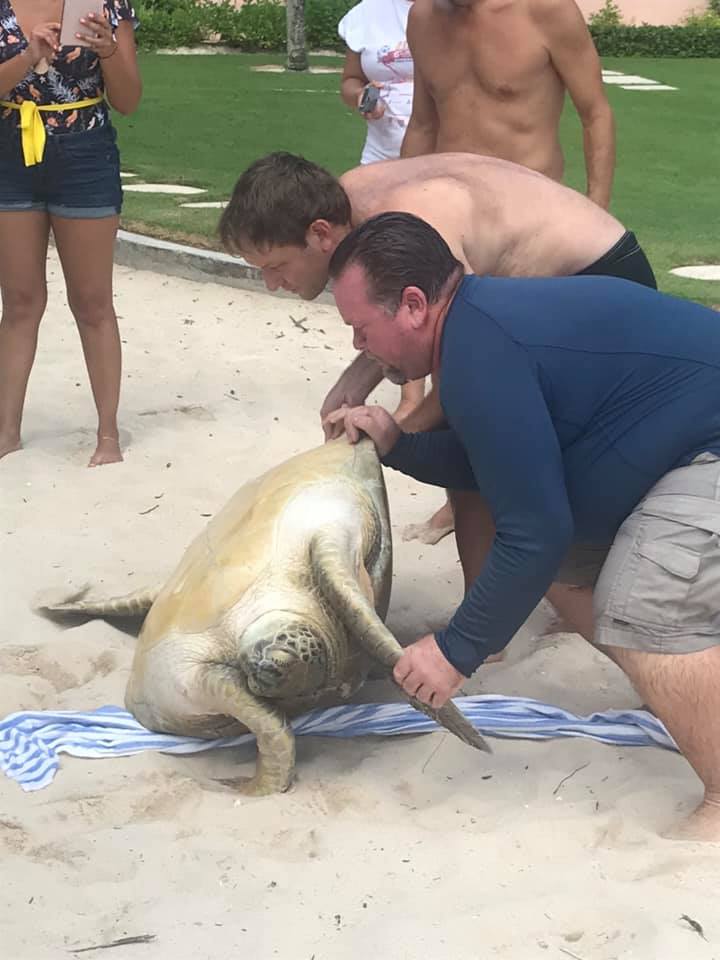 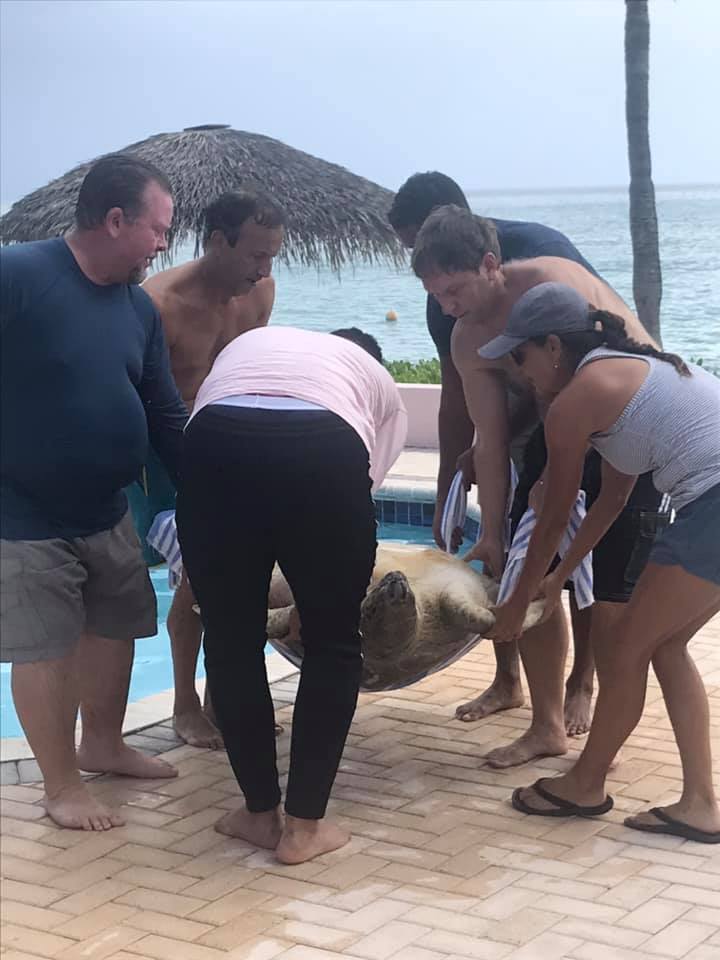 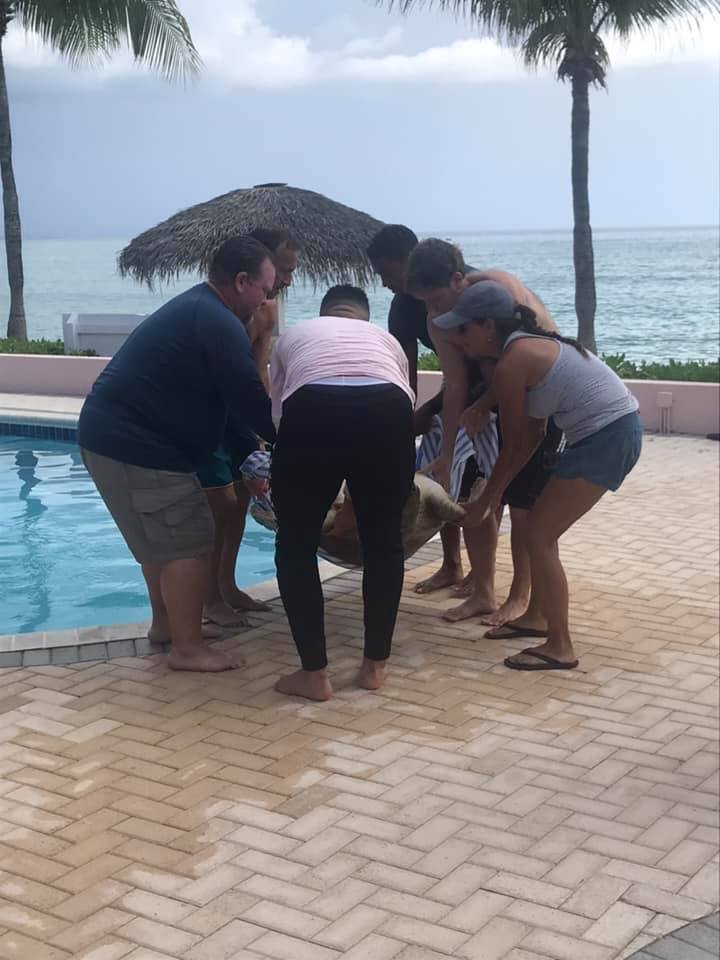 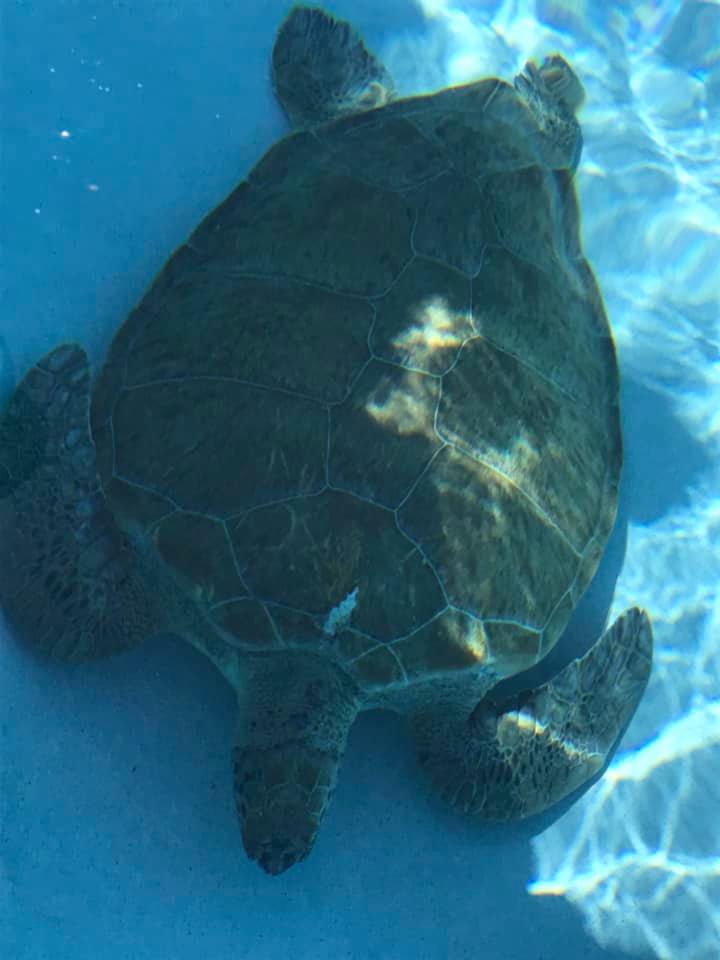 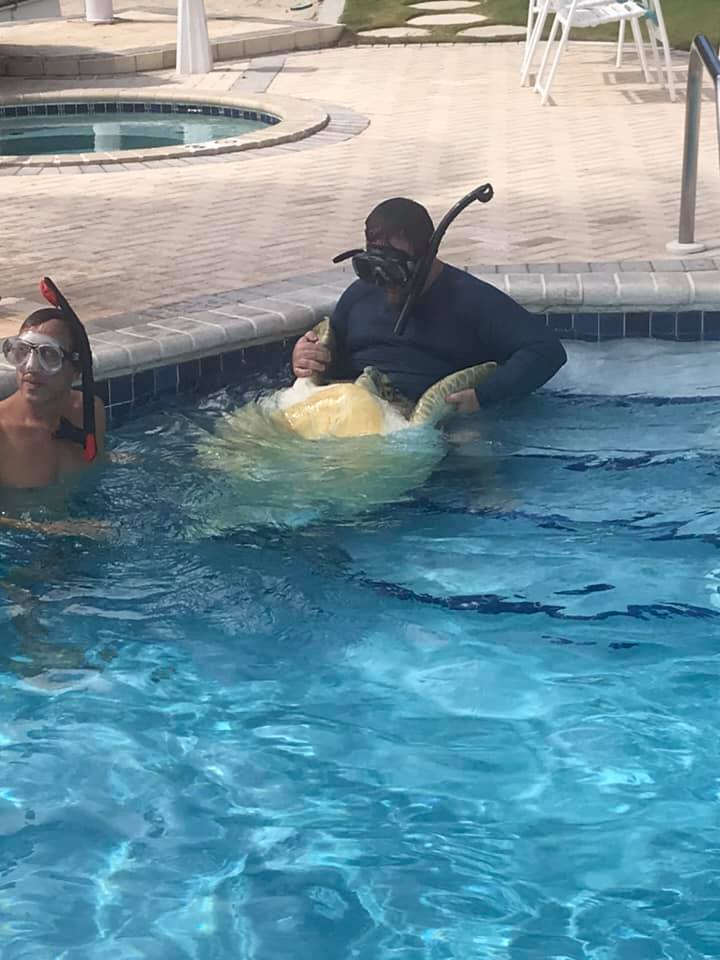 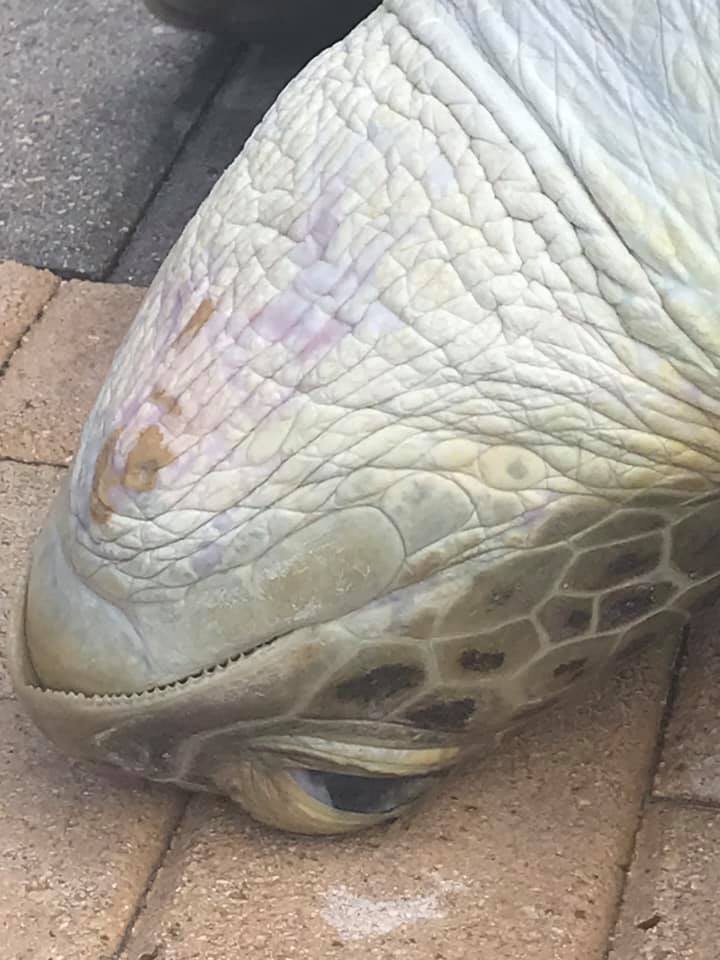 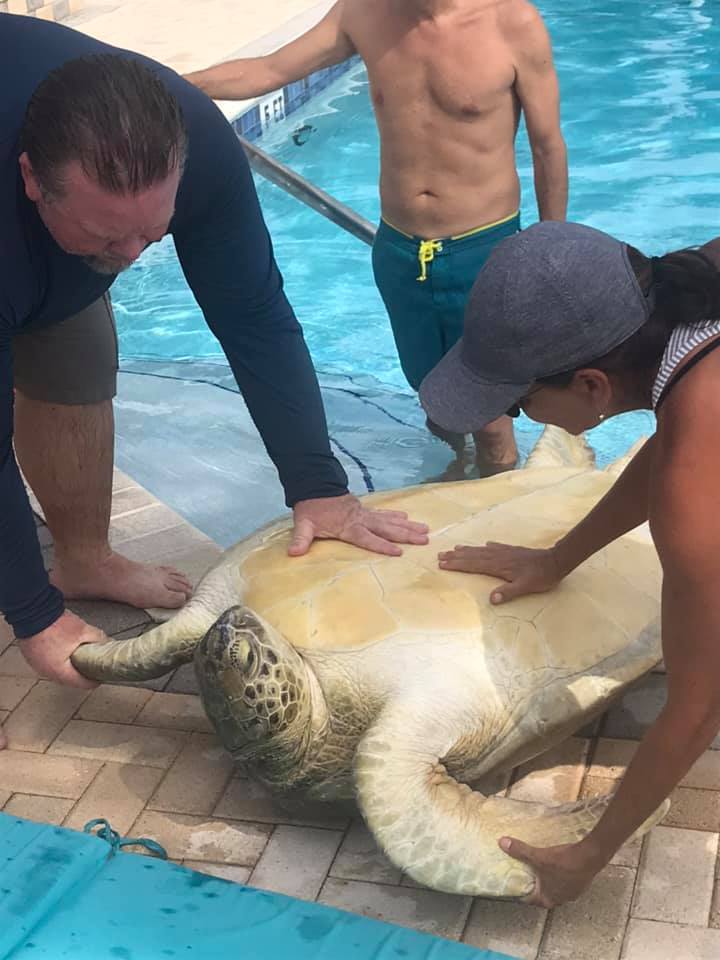 It is likely that the adult female got disoriented while laying her eggs overnight and ended up in the pool instead of the ocean. She is estimated to be around 30-40 years old and weighed between 350-400 lbs. Apparently this is the second time that a turtle has been found in that particular pool.

Residents and visitors alike are always reminded to be on the lookout for these gentle ocean giants during the nesting season.

This condo turns off the exterior property lights at night which are known to distract and confuse turtles who use the moonlight as a guide to return to the sea. DoE shares on its website some important information on the endangered species:

Nesting Green Turtles
Sea turtles are charismatic endangered animals that have roamed the seas and nested on our shores for millions of years. A healthy wild sea turtle population can provide unforgettable experiences to Cayman Islands residents and visitors by allowing observation of turtle tracks and nests on our beaches, juvenile turtles in our waters, and baby turtles emerging from the sand and scurrying into the sea. While sea turtles spend the majority of their lives in the ocean, during the nesting season female turtles make their way on shore to lay their eggs in the sand. The nesting process takes about 1-2 hours and then the female turtle returns to the water, leaving a distinctive track on the beach. After about fifty to sixty days, baby turtles (called “hatchlings”) will emerge from the sand and will scurry down to the sea. With luck, after 15-20 years or more they will return to breed and replenish our populations. The Department of Environment is dedicated to protecting sea turtles and learning as much as possible about the biology and life history of these elusive animals. For more information on DoE monitoring and how you can help.

No, thanks.
How do you feel after reading this?
Tags: Department of Environmentgreen turtles

(CMR) A blue iguana from the Queen Elizabeth II Botanic Park that was seen at a business in the industrial...

(CMR) The Miss Cayman Islands Universe Committee has confirmed that no action will be taken against the reigning queen Ms. Tiffanny...

(CMR) The Veterinary team will be in the Brac on Wednesday, 31 August, to conduct rabies vaccinations for pets who...

(CMR) Department of Environment employee Sabrina Douglas became the first Caymanian to journey into Cayman Rise (Trench) when she made...

California to end the sale of new gas cars by 2035

(CMR) California will ban the use of fuel-powered motor vehicles and require that by 2035 all new vehicles sold in...

(CMR) The Department of Environment is urging people with beachside properties to use turtle-friendly lighting as some 25 hatchlings were...