(CMR) Speaking at a COVID-19 press briefing on Wednesday (May 27) Finance Minister Roy McTaggart said  Cayman had spent close to $30 million in an effort to fight and manage the coronavirus.

According to McTaggart, through to April 30 of this year, a total cost, either approved or incurred, due to COVID-19 amounted to a whopping $31.6 million.

Some of that $31.6 million, McTaggart revealed was offset by someone who graciously paid for 50 percent of the test kits that were purchased by the island.

McTaggart further explained that the island had also received additional funds from the sale of some of the test kits.

Accounting for the cost that was offset, which amounted to approximately $3.6 million, McTaggart revealed that the government treasury, up to May 13, 2020, had dished out approximately $28,300,075.

McTaggart used the occasion to share that the country had issued a request for proposal (RFP) as it sought to secure a standby line of credit in the amount of $500 million. 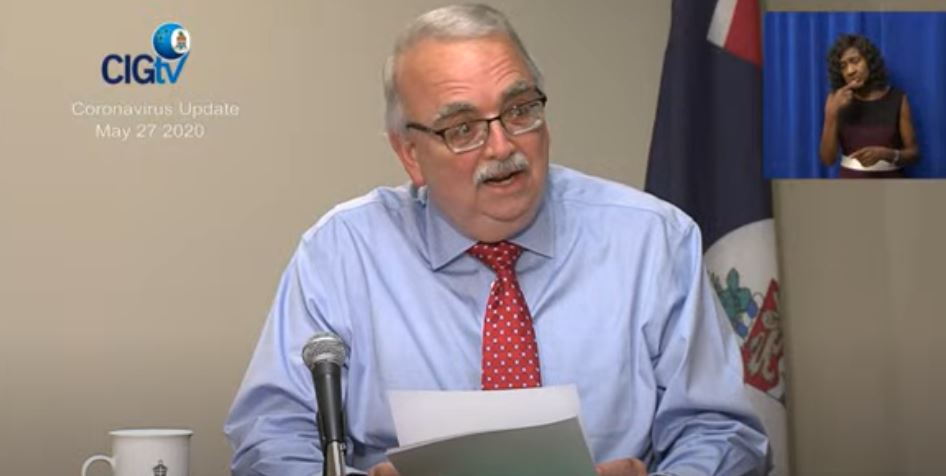 “In order to give the country the financial security and build the resilience that we need Cabinet last week authorized the Ministry of Finance to issue a request for proposal for the establishment of a standby line of credit in the amount of $500 million,” said McTaggart

McTaggart stressed that the line of credit would be used only if the country finds itself in the most unfortunate position of having exhausted its cash reserves.

He further added that the government would need to seek approval from the Legislative Assembly and The Foreign &Commonwealth Office to use the funds.

” This line of credit is in effect a security blanket for us- to give us the resilience and the ability to access funding quickly if we need it!  I do not want the country to be placed in a position where we have to be scrambling to find or to borrow money; when in effect every other country in the world and ever major business is seeking to borrow money in the commercial market and in the banking systems worldwide,” added McTaggart

When pressed about the anticipated timeline for the burnout of the cash reserves, McTaggart said it would likely hold up until the first or second quarter of  2021.

“At the present burn rate, unless there is a very significant turnaround in our financial fortunes, it will be sometime in the first to the second quarter of next year before we will start to run into issues and have need to possibly try and access the standby line of credit,” said McTaggart.

No, thanks.
How do you feel after reading this?
Tags: Cayman Economycovid-19Finance Minister Roy McTaggartStandby line of credit