(CMR) Representatives from The Opposition government have filed several private member's motions for the upcoming legislative sitting. The majority of the proposal seeks to address safety and crime within the islands.

Most notably is a motion to introduce minimum sentences for child molesters in the wake of several recent high profile court cases. There has been a large community outcry for numerous years on why offenders appear to be getting away with minimal sentences. Many have criticized the lack of response from the elected members on this topic.

Bodden Town West MLA, Christopher Saunders, and Savannah MLA Anthony Eden presented the motion to the Speaker of the House earlier this week. It has now accepted it and will be listed on next week's agenda once the House reconvenes. 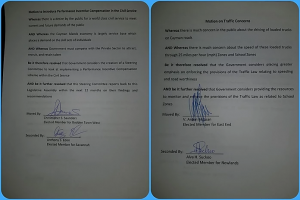 In the wake of growing concerns about crime in the community, The Opposition is also seeking to have a select committee formed to develop a national crime strategy and random drug testing at the prison for both staff and prisoners. They also want greater enforcement of existing traffic laws specifically in school zoned areas and as it related to loaded trucks.

Another interesting motion is seeking to form a steering committee to explore the possibility of introducing performance-based incentives for civil servants.

This Opposition has been applauded by many as being very active and extremely organized with regular meetings and contributions to the legislative assembly.

MLA Saunders is optimistic about the success of the proposed motions:

I hope that these motions are supported by the members on the government side. In order for our democracy to work, we need participation from everyone. I hope the public looks at these motions and call their representatives and encourage them to support them.

Petique set to close after 25-years