The Royal Cayman Islands Police Service (RCIPS) on Monday said that foul play is not suspected in a September 20 incident in which a 36-year-old man was found dead in the vicinity of Eden Rock dive shop on the waterfront.

Reports from the RCIPS are that Melito Fernandez, an Indian national, was found unresponsive at around 3:40 am on at the rear of a dive shop on the waterfront in the vicinity of Eden Rock.

Despite this confirmation by the RCIPS of no suspected foul play, many close to Fernandez find it difficult to believe a man who was out celebrating just hours before could have met any other fate. His friends have informed CMR that he was out at the Wharf that evening and had then dropped some friends home and returned to his place. He was known to be at home before alleging receiving a phone call and heading back out. Shortly after that, his body was found. His friends have admitted that they believe something more nefarious must have happened to him. One friend stated, “Melito was a very happy person. He had recently had a number of personal celebrations. The only logical option is someone did something to him.”

Some of his friends went out this past Sunday night, October 1, to celebrate his life. 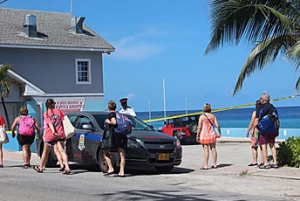 By all accounts, Fernandez was a well-liked individual who made everyone around him smile and he really enjoyed life. Another friend remarked, “he liked to have a good time and loved his family. He was making plans for them to visit soon.”

He worked at The Security Centre as a supervisor and leaves behind a wife and daughter.

While no foul play is suspected, police say they are continuing to investigate Fernandez’s sudden death. Anyone with any details to assist should contact them directly on 949-4222.