(CMR) The Board of Directors of OfReg has appointed controversial businessman Gregg Anderson along with Mr. Duke Monroe as Acting CEO's until a permanent CEO is appointed.

The announcement comes amid questions of Anderson's suitability to hold the position of CEO with a government regulatory agency given his past lawsuits and breaches of Cayman's labor laws.

Anderson has been the subject of several complaints against his company Pure Healthcare Ltd. It is against this backdrop that persons are questioning his ability to now act as CEO of Cayman's transitioning OfReg at a time when they require strong and ethical leadership.

Mr. Gregg Anderson, MBA, CMC, CAMS, BSc. (Hon), is the Executive Director of Energy and Utilities at OfReg and sat on the OfReg board as Deputy Chair prior to that appointment.

However, In April 2016 Polar 7 Ltd. filed a lawsuit against Gregg Anderson and his company Pure Healthcare Ltd. in relation to unpaid rent of CI$33,000. The writ was in relation to the defendant's alleged breach of unpaid rent of unit C6 in Cayman Business Park, George Town where his dental company was a tenant from 2012. It alleges that he entered into a 3-year lease agreement for CI$3,000 per month which expired in March 2015. However, despite not exercising the renewal option under the lease he continued to occupy the premises for an additional 12 months without paying rent.

The action was seeking to have him vacate the premises as well as pay the outstanding $33,000 being claimed for rent. Our sources indicate that Anderson in his personal capacity was named as the first defendant and his company as the second defendant. In August 2016 the action against the first defendant was dismissed. The original writ can be viewed here.

When questioned about the matter OfReg's PR agency commented that:

“I can confirm that Mr. Anderson has no legal cases against him.”

However, Anderson and Pure Health Care Ltd. were also featured in an October 2016 Cayman Compass article and editorial in which The Labour Tribunal found against Anderson's company and in their ruling stated:

“The [Labour] Tribunal finds it hard to think of a dismissal more procedurally unfair.”

According to the publication, Dr. Linsay Harvey went unpaid for three months and eventually got fired by Anderson when she complained about her situation. The August 2016 ruling further stated:

“No reasonable employer could have decided to dismiss [Dr. Harvey], essentially because she told friends, her attorney and regulatory bodies in the Cayman Islands that she was not being paid and that Pure Healthcare [her employer] was experiencing other difficulties,” 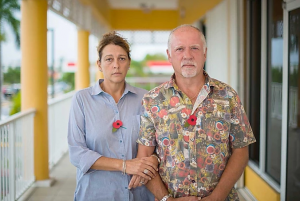 The Tribunal found some seriously egregious behavior by Anderson, identified in the tribunal records as the owner of Pure Healthcare. In one email, Mr. Anderson wrote, “I plead your forgiveness in my inability to pay your salary today and in a timely manner as required …”

“In the tribunal’s view, it would not be disclosing confidential information … for [Dr. Harvey] to complain about [nonpayment of salary] to friends, her attorney or regulatory bodies,” the ruling stated.

Without any findings of “serious misconduct” against Dr. Harvey, the Labour Tribunal concluded that her dismissal on Dec. 30, 2015, must have been unfair. Unfortunately because of the current deficiencies in the labor law Dr. Harvey was not entitled to any monetary compensation.

The Compass editorial stated that it was unfortunates that those paid on a commission basis appear to have no effective redress when unfairly dismissed. It further highlighted the greater impact of such employment infractions by stating:

Setting aside the mistreatment suffered by Dr. Harvey and, by proxy her husband, in a broader sense the most serious damage this case has caused is to Cayman’s reputation.

We are a country whose economy depends on foreign workers. (According to the most recent government data, 44 percent of Cayman employees are “non-Caymanian,” and a further 10 percent are permanent residents.) We simply cannot afford for Cayman to be seen as a place where local businesses take advantage of foreign workers.

It appears that the complainant was never compensated for the three months of lost wages and has since returned disgruntled to the UK.

An independent human resources consultant indicated that they were surprised that such an appointment would be made in light of the above. Not personally connected with Anderson's matters they stated:

“Generally speaking a CEO should have an unblemished record. You want people to be in a position to respect this individual and their decision making. The mere fact that someone has a labour tribunal judgment against them does not bode well at all. It speaks to their fitness and integrity to fire someone for what appears to be expressing their right to freedom of speech. Now having this person heralded as part of the CEO team to move OfReg forward is questionable at best.”

Despite the above lawsuit Pure Healthcare still has its listed registered address as Cayman Business Park. Their publicly listed phone number indicates that it is not in service. 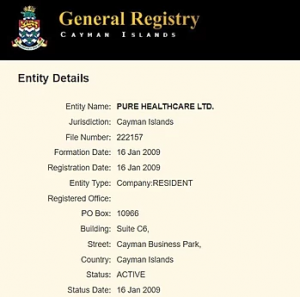 Anderson was also an independent political candidate in the district of Bodden town in 2013.