(CMR) The Centres for Disease Control and Prevention launched an investigation into the death of a Florida doctor who died two weeks after receiving the Pfizer vaccine.

Authorities said the doctor's death had not been definitively linked to the Pfizer vaccine; however, Dr. Michael's widow thinks the vaccine is to be blamed.

In a lengthy Facebook page, Heidi Neckelmann asked that her husband's death not be in vain and that information on his death be shared with the public.

She believes he died due to a strong reaction to the COVID vaccine. Neckelmann said,

“He was a very healthy 56-year-old, loved by everyone in the community, delivered hundreds of healthy babies and worked tirelessly through the pandemic.”

She said Dr. Michael, who was vaccinated with the Pfizer vaccine on December 18,  sought medical attention three days later after observing spots on his feet and hands.
She said tests done showed the doctor's platelet count was low. He was admitted to the ICU with a diagnosis of acute immune thrombocytopenic purpura (ITP), which she believes was caused by a severe reaction to the COVID vaccine. 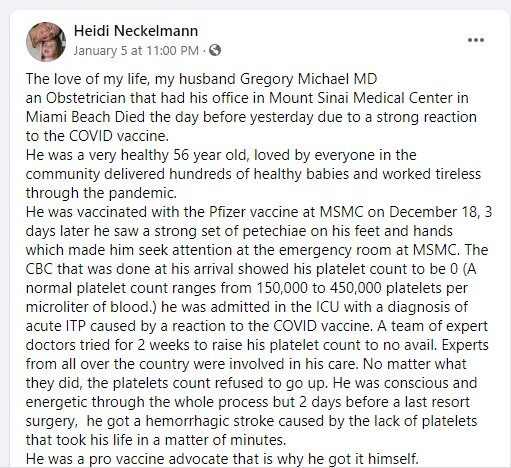 Neckelmann said doctors tried for two weeks to raise her husband's platelet level but were unsuccessful.
She added: “Experts from all over the country were involved in his care. No matter what they did, the platelet count refused to go up.”
She said the well-known doctor was conscious and energetic throughout the process but got a hemorrhagic stroke caused by the lack of platelets and died shortly afterward.

“I believe that people should be aware that side effects can happen, that it is not good for everyone and in this case, destroyed a beautiful life, a perfect family, and has affected so many people in the community,” Nickelmann said.

The Miami-Dade County Medical Examiner is working with the Florida Department of Health and the US Centers for Disease Control and Prevention to investigate the doctor's death.

No, thanks.
How do you feel after reading this?
Tags: covid-19Pfizer vaccine

(CMR) Family and friends of the husband of a school teacher who was killed in a mass shooting at a...

(CMR) Weeks after banning wheat export, India, a major sugar producer, announced it would be restricting sugar exports in a...

(CMR) Eleven newborn babies died Wednesday when a fire allegedly caused by a short circuit tore through the neonatal section...

(CMR) Sri Lanka's new prime minister Ranil Wickremesinghe announced Monday that the country was down to its last day of...

(CMR) At least 10 people were killed after a gunman wearing military-style clothing and body armor opened fire with a...

(CMR) A Paraguayan public prosecutor who led a string of high-profile cases against organized crime and drug trafficking was shot...