Panton: No ongoing negotiations with Progressives

“My team is busy meeting over the weekend finalizing the composition of the Cabinet and expects to make an announcement on Monday.”

(CMR) Premier Designate Wayne Panton has addressed the Progressive's claims that there are “negotiations ongoing” with the Independents to form a government. In a press release issued late this evening, Panton confirmed that a 15-minute conversation took place but there are no ongoing negotiations as the Progressives are claiming.

Despite not having the majority votes in last week's general election, the Progressives are not prepared to concede that the majority of the people of the Cayman Islands did not vote for them. It appears that they wish for people to think there is some opportunity to form a coalition government with them in charge and some PACT members.

In a document in circulation independents received 68% of the vote in Wednesday's election. Progressiv members only received 32% of the overall vote: 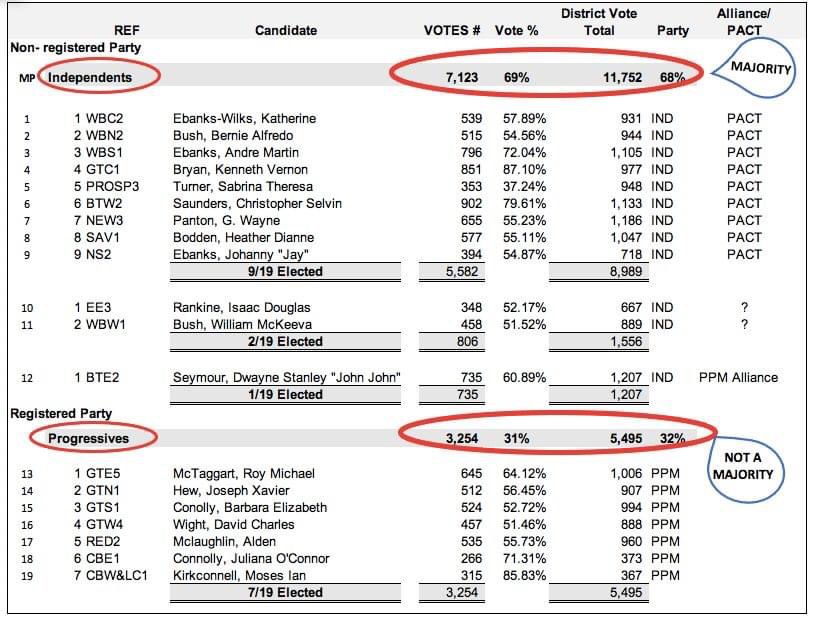 However, exclusive CMR sources have indicated that will not happen. In fact, the independents have the majority even with Issac Rankine having decided to join on with the Progressives. If Rankine does not reconsider his position they may have to work with others but it will not be a situation where the Progressives take on the leadership role.

Despite this being the true position, the release from the Progressives which appears hours before Panton's sought to confuse the position and mislead the public into thinking they would still be able to pull off the formation of a government.

For his part, Panton said:

“My team have asked that we make the best efforts to have a government that is robust, reflective and inclusive of the broadest cross-section of our community, including Cayman Brac and Little Cayman. It is on that basis that I approached the Progressives. Unfortunately, it is clear they have not yet accepted the results of the elections and the will of the people and the meeting ended after 15 minutes.”

No, thanks.
How do you feel after reading this?
Tags: Wayne Panton