Rosa Ramsay was a native of Ireland and mother of Margaret Ramsay-Hale, well known to the local community as a former judge. Her husband was a prominent QC in Jamaica and pre-deceased Rosa in 2002.

Margaret Ramsay-Hale was former Chief Magistrate of the Cayman Islands and is the first female Chief Justice of Turks and Caicos; a position she has held since 2014.

Ramsay-Hale first practiced law in the Chambers of Howard Hamilton after being called to the Bar in October 1991.

She then took up a position in the Public Bar of Jamaica as a Crown Counsel in January 1994.

In 1995, she was appointed a judge of the family court in St James, Jamaica, and eventually moved on to the criminal courts as a resident magistrate for the parish.

In September of 1998, she moved to the Cayman Islands to serve as a magistrate of the summary court of there.

In 2006, she sat as an acting judge on the Grand Court for several months and was appointed as Chief Magistrate in 2008, where she served until taking up a judgeship in the TCI. 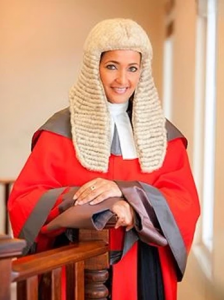 No, thanks.
How do you feel after reading this?
Tags: Rosa Ramsay