by Renae Stampp
in Tech News
0

(CMR) Xbox users worried about a Live Gold price increase announced by Microsoft Friday can relax as the company has decided to let prices remain the same.

Xbox posted on its website Friday night that it messed up when it indicated a price increase. 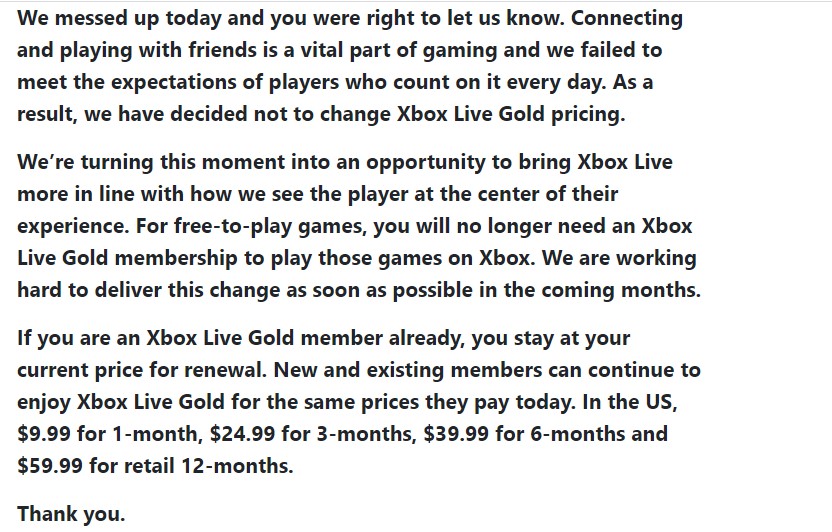 The company had announced earlier the cost for a yearly subscription to the service, which is required to play games online on Xbox consoles, would have doubled to $120 for many users.

Xbox also announced that it would be working to change its free-to-play gaming subscription system in the coming months. The company said with these changes, players will no longer need an Xbox Live Gold membership to play those games.

This would mean Xbox Live would be in line with Sony and Nintendo’s online services by dropping the subscription requirement for free-to-play games such as Fortnite.

No, thanks.
How do you feel after reading this?
Tags: gamingXbox

Netflix loses $50 billion in value in under 24 hours

(CMR) Dr. Martha K. Williams, who grew up in Cayman Brac, has been inducted into the NASA Inventors Hall of...

More people want to use implanted microchips for payment

(CMR) More people in Europe and the UK are open to using implantable payment chips, which would allow them to...

(CMR)  Amazon is raising the price of its annual Prime subscriptions from $119 to $139 per year in the United...

(CMR) WhatsApp for Desktop is bringing the ability to pause and resume when recording a voice message. The WhatsApp beta...

"As soon as we became aware of this error, we took swift action to fix it." Amazon (CMR) Alexa voice assistant...

VIRAL VIDEO: Wanted man turns himself in to detention center