They have stated that the conduct has spanned over a period of 13 years and despite numerous formal complaints nothing no action has been taken by senior management.

Cayman Marl Road was recently contacted by several victims who allege that formal complaints date back to 2005 of sexual misconduct and harassment in the workplace. In 2005 there were at least four reported cases of unwanted and unwelcome physical groping, inappropriate sexually charged behavior and comments at work. At the time the complaints were alleged to have been given to then port director, Paul Hurlston. The complainants were informed that the information was passed onto the port board but it appears that no action was taken. The behavior continued.

In May 2018, NINE women complained jointly again about unwanted sexual comments, non-verbal sexual gestures and inappropriate conduct which they allege amounts to sexual harassment and sexual misconduct to the Human Resources Manager. To date, the CFO remains on the job and continues to work with these women. The complainants believe that their concerns about workplace safety against harassment have fallen on deaf ears.

The CFO is also the FOI Manager and in early May the following was sent to him directly by some advocates attempting to assist the victims:

Have there been any cases of sexual harassment at the Port Authority of the Cayman Islands? If yes then answer the following.

How many cases resulted in no action taken against the accused despite there being evidence of sexual harassment?

How does the Port handle sexual harassment cases? What is the policy?

Of the staff suspended, are they still employed at the Port? Has the Port ensured that victims are not abused further, are there any meetings with victims or other people that they work with to check if the behaviour has continued? 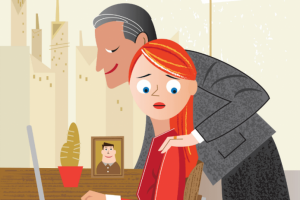 The above has not yet been responded to but the 30-day deadline has also not yet passed.

Given the recent suspension of the Port Director, Clement Reid, these victims are hopeful that the climate of wrongdoing that has been exposed can now assist them in finally getting some justice. The feeling of desperation came across clearly in their communications with CMR when they shared,

“The PREVIOUS Port Director at the time apparently took NO action. This man has continued his rampage for 13 years. But it seems that there is an “old boys club” because it's … the CFO has not been suspended. These women have to come to work every day and face this man. It is 2018 and this cannot continue anywhere!

The Cayman Islands Government released a sexual harassment policy in May 2016. However, to date, many still complain that it's a nice paper-based policy will little to no real enforcement. CMR notes that government agencies are not part of the core government and would not be subject to civil service policy directly but as a matter of good employment governance should have their own policies in place.

These complaints come at a time when the port director has been placed on suspension after various complaints lodged against him were made public in a scathing auditor general's report highlighting poor management practices including the preferential treatment of several female employees who received jobs and outlandish salaries beyond the approved pay grade – all amidst other allegations of the benefits being the result of personal relationships with the suspended director.

2018 has seen the emergence of the #MeToo movement in the United States where sexual harassment and assault victims have taken a stand against such behavior. It now appears that some victims in Cayman are prepared to join that charge.

Both the port management/board as well as Parsons Jr. was contacted directly. Parsons Jr. did not reply to our messages. However, the port Deputy Director & Chief Commercial Officer Melissa Ebanks replied,

“With reference to the accusations of sexual harassment, PACI has no comment at this time.”

CMR contacted a local attorney about what recourse the women have as many fear job losses and retaliation should they full come forward. They responded with the following advice:

“It is an unfortunate situation that women in Cayman continue to be victims of workplace sexual harassment and management refuse to take appropriate action. In other jurisdictions this behavior is simply no longer tolerated. That lack of tolerance does not yet exist in our jurisdiction but people can bring this change about. It does require a level of bravery and victims should know that employers can be held legally accountable for the non-actions in these circumstances.”