by CMR
in Tech News
0

(CMR) WhatsApp is making some changes to its privacy policy within the next month – if you refuse to agree to the new terms and conditions you could lose access to the app. This decision has already made local users consider their other options with many sharing with CMR that they are trying Telegram or Signal.

The deserting of the app is happening around the world with millions of people already switching to competitors in the past week according to data analytics firm Sensor Tower. The move is to monetize WhatsApp and allow it to finally make money. Businesses will be able to contact their clients via the platform and sell products directly to them.

WhatsApp currently has over 2 billion users worldwide but this recent move has sent Signal to the top of both Apple and Google's app stores for downloads.

Elon Musk even endorsed the Signal app over WhatsApp on his Twitter account on Thursday and his tween was shared over 57,000 times.

The influx has meant that Signal has been struggling to keep up and was experiencing delays as carriers struggled to deliver the text message verifications required to use the app.

“We cannot see your private chats or calls and neither can Facebook … we're committed to this technology and committed to defending it globally. We've updated our policy to be transparent and to better describe optional people-to-business features.”

The term news will share a user's private data which includes their phone number, logs of how longs and how often you use the app and how you interact with others with WhatsApp's parent company – Facebook Inc. The deadline for agreeing to the new terms is February 8, 2021 or you will lose access to your chats and contacts. The update will appear as an in-app notification which you can ignore until the February deadline. 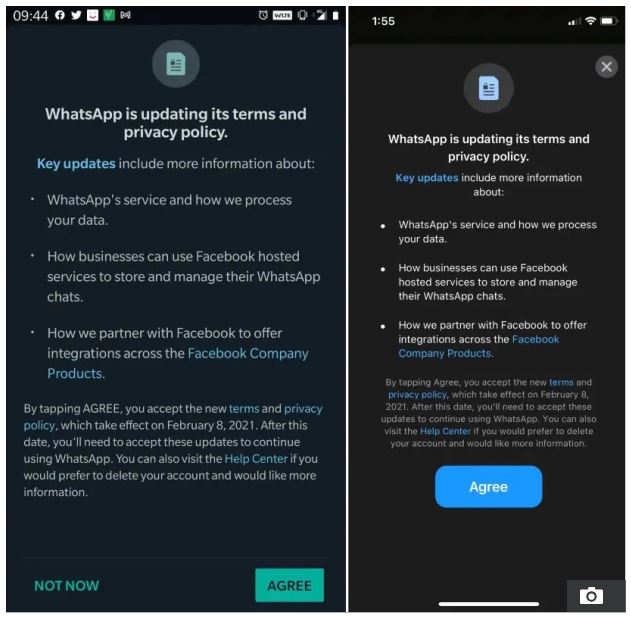 The notification was made public on Wednesday and says:

WhatsApp uses a proprietary version of Signal's encryption technology but the largest concern is that the world's leading messaging platform will be following Facebook's model which has been less than stellar. Facebook has been described as “the world's most avaricious data harvesting machine.”

Facebook acquired Whatsapp in 2014. Forbes publication recently shared their opinion on whether users should leave the app:

“And so, should you stop using WhatsApp? The short answer is no, nothing has really changed. WhatsApp’s data sharing hasn’t really changed, its security hasn’t changed, it remains the largest end-to-end encrypted platform available, and one that’s likely be used by all those you communicate with. WhatsApp is materially better than SMS and Facebook Messenger, its mainstream alternatives. It is secure cross-platform unlike iMessage, and it’s end-to-end encrypted by default, unlike Telegram.”

CMR Daily Buzz | May 20, 2022
Netflix loses $50 billion in value in under 24 hours
Cayman-born scientist inducted into NASA Inventors Hall of Fame
More people want to use implanted microchips for payment
Share your vote!

No, thanks.
How do you feel after reading this?
Tags: SignalWhatsapp

Netflix loses $50 billion in value in under 24 hours

(CMR) Dr. Martha K. Williams, who grew up in Cayman Brac, has been inducted into the NASA Inventors Hall of...

More people want to use implanted microchips for payment

(CMR) More people in Europe and the UK are open to using implantable payment chips, which would allow them to...

(CMR)  Amazon is raising the price of its annual Prime subscriptions from $119 to $139 per year in the United...

(CMR) WhatsApp for Desktop is bringing the ability to pause and resume when recording a voice message. The WhatsApp beta...

"As soon as we became aware of this error, we took swift action to fix it." Amazon (CMR) Alexa voice assistant...