by CMR
in Tech News
0

2
SHARES
67
VIEWS
Share on FacebookShare on TwitterShare on Whatsapp

The messaging app, which is used by millions worldwide, will soon make the regret from sending an embarrassing message a thing of the past.

The feature – called “Delete for Everyone” – literally allows users to unsend messages. It will only work within five minutes of the message being sent and also if the recipient hasn’t opened it. The feature also doesn’t only just work with messages, as users can also erase any images, GIFs and attachments.

It was first tested in the Beta version of the app back in April when it was called “Recall”.

And although it was in the code for the 2.17.30 version of the app, WhatsApp still hasn’t enabled it.

The update is due to be rolled-out soon on Android, Windows and iOS devices.

How to Delete Sent Messages in WhatsApp 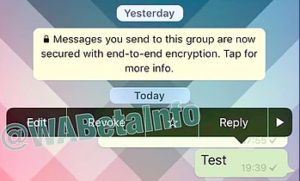 To cancel a sent message in WhatsApp, the only requirement is that both the sender (that is you) and the recipient (that is, the other person) have the latest version of the application installed. This detail is fundamental since otherwise the message will not be erased even though it shows the message that it has been cancelled. That explains that in the last beta this option will not work properly, and when it arrives this novelty will be essential that our contacts update the app for the deletion to work correctly.

On the official WhatsApp page, WhatsApp explains that the time to revoke a message that has already been sent will be five minutes. After that time, we can no longer eliminate the message, and whatever we do the other person will see it the moment you enter the application. Otherwise, if we hurry we can erase the text before you read it.